Fleetwood host Wimbledon at Highbury Stadium in League One on Saturday. Two of the division’s bottom four meet for a crunch encounter in Lancashire. Read our free predictions and find the latest odds for the fixture below in our detailed match preview.

Survival is on the line as Fleetwood and Wimbledon go head-to-head for three crucial points in League One. Read our top three predictions for this weekend’s fixture below.

Two of League One’s relegation candidates face off at Highbury Stadium on Saturday where anything other than a victory for Wimbledon would consign the Wombles to relegation. However, Fleetwood’s need for points is just as dire and a win for the hosts could take them out of the drop zone. Home advantage will likely be key on Saturday and when you consider that Wimbledon have lost five away assignments on the bounce, the smart money should go on Fleetwood.

Saturday’s high stakes fixture at Highbury Stadium could hardly be more pivotal and as such we expect to see both teams battle for every inch in Lancashire. Wimbledon haven’t scored more than once in any of their last ten league fixtures, while Fleetwood have notched one or fewer times in six of their last seven skirmishes at home. With so much on the line, both clubs will be determined to keep things as tight as possible and the under 2.5 goals market is an appealing choice with the factors at play digested.

This weekend’s clash between Fleetwood and Wimbledon is the very definition of a relegation six-pointer and with survival on the line, we expect to see a real edge to proceedings. A combination of nerves, frustration and desperation to win should ensure that the tackles fly at Highbury Stadium and a high card count is envisaged.

Darnell Johnson, Brad Halliday, Harrison Holgate and captain Jordan Rossiter are expected to miss out for Fleetwood, while Danny Andrew is considered doubtful. Patrick Lane was sent off in Town’s 0-0 draw at Gillingham on Easter Monday and the midfielder will sit Saturday’s game out through suspension as a result.

Wimbledon could be without a number of players this weekend, with Luke McCormick, Zach Robinson, Aaron Cosgrove, Jack Madelin, Cheye Alexande and Aaron Presley all listed as injured. The Wombles earned a point at home to Wycombe on Monday, though wins are required now with just two games to play and a four point gap to safety to breach.

Top Betting Odds and Stats for Fleetwood vs Wimbledon

View our selection of some of the best stats for Saturday’s game alongside a tool to help you choose the best odds. 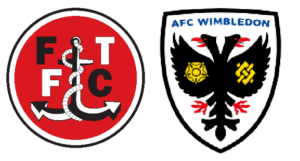 Fleetwood and Wimbledon drew 2-2 when they last played on November 27th.

Where will Saturday’s fixture be played?

Fleetwood vs Wimbledon will be contested at Highbury Stadium.