Finn Harps and Sligo Rovers meet in Ballybofey in the Premier Division on Monday. Rovers were comfortable winners when they last played Harps in March. Read our free predictions and find the latest odds for the fixture below in our detailed match preview.

Sligo Rovers are aiming to beat Finn Harps for the second time this season when the teams meet in the Premier Division on Monday. Read our top three predictions for this week’s fixture below.

Sligo Rovers produced one of their most convincing displays of the campaign so far when they ousted Finn Harps 3-1 at The Showgrounds last month and Liam Buckley’s side will kick off Monday’s rematch as favourites as a result. Harps have yet to record a single victory in Ballybofey this term and their dismal showing on home turf means they are worth opposing again.

Although Finn Haps were able to claim just one point from their last two home matches, Ollie Horgan’s troops did manage to find the net three times across that combined 180 minutes of football and the host’s improving output in the final third suggests they can land a consolation blow on Monday. Both teams notched when Harps and Rovers met last month and a similar outcome looks possible in Ballybofey this week.

Ex-Falkirk attacker Aidan Keena has made a superb impact since his move to Sligo from Scotland in January and the 22-year-old rattled home a fantastic hattrick when Rovers put Finn Harps to the sword in March. With that display still relatively fresh in his mind, Keena could punish the same defence on Monday and the fleet-footed forward jumps out at a price worth backing in the anytime goalscorer market.

Finn Harps have a clean bill of health this week giving manager Ollie Horgan decision’s to make all over the pitch. Harps are considered among the favourites to go down this season and their early haul of just two points from five home fixtures is undoubtedly the return of genuine relegation contenders. Finn Harps have won only once of their last six meetings with Sligo.

Sligo have made a solid if unspectacular start to the 2022 campaign as they bid to emulate last season’s impressive third place finish. Rovers have been a much more threatening force on the road than they have been at The Showground this term. The Bit O’Reds have only won once in five attempts on home soil since the new season kicked off.

View our pick of the top stats for Monday’s game below alongside a tool to help you select the best odds. 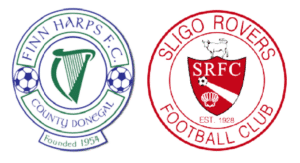 Where will Monday’s game be hosted?

Finn Harps vs Sligo Rovers will be contested at Finn Park in Ballybofey.