Feyenoord and Utrecht meet in Rotterdam on Sunday in the Dutch Eredivisie. The hosts need a win to ensure their keep hold of third place. Read our free predictions and find the latest odds for the fixture below in our detailed match preview.

Feyenoord have taken ten points from the last 12 on offer in Rotterdam ahead of their clash with Utrecht on Sunday. Read our top three predictions for this weekend’s fixture below.

With just one win in their last eight Eredivisie assignments, Utrecht are in the midst of a late-season slump and they are worth opposing when they visit a strong Feyenoord side on Sunday as a result. The hosts have won seven of their last ten league matches, though their return of just three cleans sheets from that run suggests they could ship a consolation. With that in mind, bettors are advised to combine a home win with both teams to score on Sunday.

Feyenoord have been one of the Eredivisie’s corner kings this season, indeed, only Ajax (216) have won more than the Rotterdam giants overall (202). Arne Slot’s side have been winning 6.5 corners on average per home game and with Feyenoord expected to be the dominant side in terms of territory against an out of sorts Utrecht, they should be able to cover the -3.0 corner handicap with comfort.

With three goals in his last four appearances, Luis Sinisterra has had an impactful few weeks for Feyenoord and the Colombian attacker is available at an interesting price in the anytime goalscorer market again on Sunday. Sinisterra also found the net when Feyenoord played Utrecht in August’s reverse fixture and the 22-year-old can breach the same defence this weekend.

Justin Bijlow will miss the rest of the season for Feyenoord with a foot injury, though selection issues are few and far between for Arne Slot beyond his absent goalkeeper. Feyenoord have the semi-finals of the Europa Conference League to look forward to later in the month, though they need to keep the wins coming domestically to stay in third spot.

Utrecht are set to be without injured pair Django Warmerdam and Henk Veerman this weekend, while Naoki Maeda is also considered doubtful. Utrecht are still in the driving seat to finish 7th though they can still finish as high as sixth if results go their way before the end of the 2021/22 Eredivisie campaign.

Top Betting Odds and Stats for Feyenoord vs Utrecht

Make sure to view our rundown of the best stats for Sunday’s fixture below alongside a tool to help you choose the best odds. 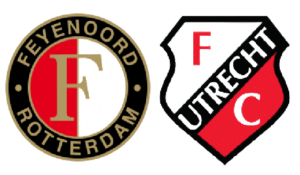 Who is Feyenoord’s top scorer this season?

With 15 goals, Guus Til is Feyenoord’s leading scorer in the Eredivisie this season.

Feyenoord have been priced as the overwhelming favourites to beat Utrecht on Sunday.