Another Eredivisie fixture we will check out is Feyenoord vs Cambuur, and today, you can see what our betting experts think about the upcoming predictions for the match.

Latest Match Predictions and Betting Odds for Feyenoord vs Cambuur

Below, you can check out the most recent match predictions that our team of experts came up with regarding the upcoming Feyenoord vs Cambuur match.

All odds are from the recommended bookmaker for this match – Ladbrokes and are subject to change. Make sure to double-check your bet slip before wagering.

Feyenoord is the obvious winner in this match-up not only because of their recent form but also because they haven’t let Cambuur beat them even once in history. Out of the sixteen fixtures these two teams played since 1992 there have been fifteen wins for Feyenoord. Also, Cambuur lost or drew five of their latest games, while Feyenoord won four of the last five matches they played. There is also an eighteen-point difference between the two clubs and Feyenoord is in the lead.

Fixture Preview and Top Injuries for Both Teams

There isn’t much to say after we laid out the facts about Feyenoord in the article, but there is some interesting news regarding their lineup for this weekend. They will have to play without defender Philippe Sandler because he is still out with a thigh injury he suffered last September.

For Cambuur, midfielder Roberts Uldrikis won’t play this weekend because of an injury he suffered at the beginning of this month. Even if he was in play, we don’t think that that would have made a difference against Feyenoord.

Match Statistics and Odds for Feyenoord vs Cambuur on Sunday

In the tables below, you can check out the most recent match statistics and odds for the upcoming Feyenoord vs Cambuur fixture. 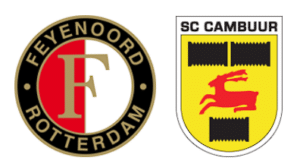