One of the games scheduled for Saturday in Super Lig is the Fenerbahce vs Kayserispor duel, so let’s take a closer look at this game and some of our free betting predictions for it.

Our best Fenerbahce vs Kayserispor betting tips and picks

If you are not sure what is the right bet for the Fenerbahce vs Kayserispor duel, check our latest betting tips for this match:

Fenerbahce to Win at Half Time and Full Time

While Fenerbahce started the new Super Lig season with seven points from four games, Kayserispor is not that far behind with six points after the first four rounds.

Still, the team from Istanbul is the clear favourite in this game and we don’t have doubts that they will justify the tag. In fact, we can see Fenerbahce winning the match after leading at half time, which was the case last time these teams met.

Four of the last five head-to-head duels between Fenerbahce and Kayserispor have gone over 2.5 total goals, so we can see that happening once again on Saturday.

After all, Fenerbahce scored at least three goals in two of the last five duels with Kayserispor and they scored three or more goals in three of the four games they played in Super Lig this season, so that wouldn’t be such a huge surprise in this game.

Fenerbahce vs Kayserispor preview: An easy job for the home team?

In the first four rounds of the new Super Lig season, Fenerbahce has two wins, one draw, and a loss to Konyaspor in the last round, so it’s a solid start, but still only enough for sixth place in the standings right now. Meanwhile, Nazim Sangaré is out at the moment through injury, while Ener Valencia has to serve a suspension.

With two wins at home and two away losses in the first four rounds, Kayserispor had a solid start to the season. After all, nobody expect this team to fight for the top, but a mid-table finish is a realistic target and the team has done well so far to get there. However, they also have five players on their injury list at the moment, which could affect their performances.

The best odds and key stats for Fenerbahce vs Kayserispor

If you want to bet on the highest Fenerbahce vs Kayserispor odds, check our selection of odds from the best UK bookies:

Common questions for Fenerbahce vs Kayserispor 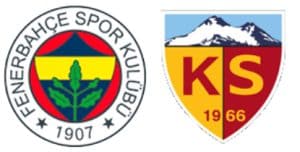