The second leg of the semi-finals of Eerste Divisie playoffs will be played on Saturday and we will see which team will go to the final stage between Eindhoven and Den Haag. So, here’s a better look at the game and some of our free betting predictions.

Our favourite Eindhoven vs Den Haag betting predictions and picks

If you are not certain what is the right bet for Eindhoven vs Den Haag, check our top betting tips for this duel:

While Den Haag won the first leg and they enter the second leg with a one-goal advantage, they are far from certain to make the next stage. In fact, we expect another exciting game and we can see Eindhoven winning the match.

After all, Eindhoven was ahead of Den Haag in regular season by four points and they were in better form coming into the playoffs. So, we expect them to get this win backed by their fans.

Although we only saw more than two goals in two of the last five h2h meetings between Eindhoven and Den Haag, that already happened in the first leg and we can see it happening again in the second leg too.

Both teams scored in four of the last five head-to-head duels between Eindhoven and Den Haag. Furthermore, that was the case in the first leg as well, so we can see it happening again on Saturday.

Furthermore, both teams scored in 53% of all Eindhoven matches in Eerste Divisie until now, while the same thing happened in 55% of all Den Haag games in the league this season.

Eindhoven vs Den Haag preview: Both teams in play ahead of the second leg

After they finished third in the regular season in Eerste Divisie, Eindhoven secured a place in the playoffs. In the first round, they eliminated De Graafschap with a win and a draw in two legs. Now they are in the semi-finals of the playoffs and they enter the second leg after losing the first one 2-1 to Den Haag, so they still have a pretty good chance to get to the final stage in the race for promotion.

The team from The Hague finished the regular season of Eerste Divisie in the fourth place, right behind Eindhoven, their opponent in the semi-finals of the playoffs. Den Haag got to this stage after eliminating NAC Breda with two wins in two legs and they enter the second leg of the semi-finals with a one-goal advantage from the first leg at home.

The best odds, stats, and more for Eindhoven vs Den Haag

If you want to bet on the highest Eindhoven vs Den Haag odds, check our selection of odds from various UK betting sites:

The most frequent questions for Eindhoven vs Den Haag 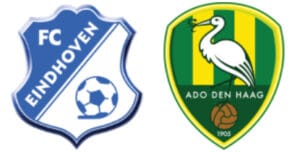