Can Dunkerque salvage anything in Ligue 2 this season? Find out below! Let’s see what our betting experts think of the upcoming Ligue 2 clash between Dunkerque and Dijon this Saturday.

Dunkerque vs Dijon: Key Prognosis and Betting Odds for the game

Dunkerque has been playing dreadfully in Ligue 2 this season and even as an away team in this game Dijon has no right to be satisfied with anything less than a victory and the 3 points.

Ladbrokes is our favorite and most trusted bookie for Ligue 2. Make sure to double-check the odds mentioned above so you can get the most out of your bet.

Only 1 game was played between Dunkerque and Dijon and it finished with a 2:0 home victory for Dijon back in September at the beginning of the season. Dunkerque didn’t play that poorly and stood their ground but as time passed the performances of the team got worse and worse and now Dunkerque is at the bottom of the table in Ligue 2 with Nancy.

The first game between the two clubs finished with only 2 goals but it could’ve easily been a larger number of goals as there were around 20 shots in total many of which were dangerously close to the goal. Dunkerque has one of the worst defenses in the league and Dijon will exploit that.

The only good news for the home side is the absence of injuries and suspensions for the game against Dijon. The team is in the 19th position in the French second division and has had a horrible record recently. It consists of 2 victories, 1 draw, and 2 losses in the last 5 games.

Dijon will count on the entire squad for this game as well as luckily no one is injured or suspended. The team isn’t out of the woods yet with the 12th position in Ligue 2 and the relegation zone could easily come closer if the team doesn’t pay attention in the next couple of games. With 2 victories, 1 draw, and 2 losses in the last 5 games a victory against the struggling team of Dunkerque is an absolute must for the way team.

H2H Info and Odds for the game

Here is the most interesting information on the odds and H2H games that you must know about before the game:

Valuable data for the Dunkerque vs Dijon match: 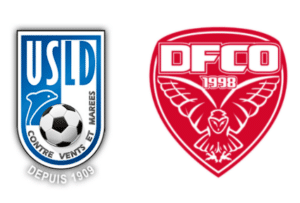