Drogheda welcome Premier Division leaders Derry City to Head in the Game Park on Monday. Derry are targeting three more points as they aim to keep hold of top spot. Read our free predictions and find the latest odds for the fixture below in our detailed match preview.

Can Derry City secure another victory over Drogheda just a month after beating them at The Ryan McBride Brandywell Stadium? Read our top three predictions for this week’s fixture below.

Derry City are the Premier Division’s early front runners and the ambitious Candystripes – who went on an aggressive recruitment drive in the off-season – have looked like potential title winners. On the road, City have captured wins in four of their five tests and on Monday, they should prove too strong for a Drogheda outfit that they swept aside 2-0 in March.

Ruaidhrí Higgins’ Derry have players that can hurt opponents from all over the pitch and there is already a healthy spread of goals through their squad. City have managed to score at least twice in all but one of their first five away fixtures of the new campaign and they bagged another brace when they beat Drogheda at The Ryan McBride Brandywell Stadium in March. With their finishing skills looking sharp, we recommend backing Derry in the over 1.5 team goals market on Monday.

Derry forward Jamie McGonigle helped himself to both of City’s goals in the club’s 2-0 win over Drogheda in March and the 26-year-old former Crusaders star has the skills to breach the same defence on Monday evening. McGonigle could be the man to fire Derry to title glory this term and he should be confident enough to do some damage against Drogs.

Darragh Markey and Adam Foley are both sidelined for Drogheda this week, though boss Kevin Doherty has options to select from elsewhere. Doherty has big boots to fill having replaced popular ex-manager Tim Clancy in the hotseat, though he has made a decent start to his tenure at Head in the Game Park.

Derry City could be without injured midfielder duo Michael Duffy and Ciaron Harkin again this week, though the Candystripes have an embarrassment of riches at their disposal and they have quality to draft in their stead. Derry have taken close to maximum points so far this term and their impressive shopping in the transfer market is already paying dividends.

View our rundown of the top stats for Monday’s fixture below alongside a tool to help you select the best odds. 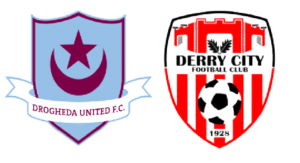 Drogheda United vs Derry City will take place at Head in the Game Park.