Borussia Dortmund are back in the Europa League after a few years of absence and they take on a Rangers team at the Signal Iduna Park for the first leg of the knockout round play-offs.

Borussia Dortmund continued their impressive form in front of goal with a 3-0 victory over Union Berlin in the recent Bundesliga game. Marco Reus was the star of the show as he came up with a brace in the absence of Erling Haaland. Rangers warmed up for this game with a 3-0 win over Annan Athletic in the Scottish FA Cup. Helander, Roofe, and Sakala were the scorers for Rangers in this game.

Erling Haaland still remains doubtful for this game. Marco Reus is likely to profit from his absence. The Dortmund captain came up with a brace during the weekend against Union Berlin. He has now scored in two of the last three games for Dortmund. Marco Reus is a consistent scorer in European football and he has scored three goals in six European games this season.

Dortmund have been demolishing most of the opponents with their offensive play but they remain a weak link at the back. Even after the recent clean sheet against Union Berlin, it is hard to go with a strong defensive display from the home team. All of their last five matches for Dortmund in all competitions have produced more than 2.5 goals and three of these games have ended with over 3.5 goals.

Rangers might be winless in five Europa League away matches, but they have scored in recent games against Brondby and Lyon on the road. Rangers could also take advantage of Dortmund’s poor defence.

Dortmund manager Marco Rose is still without several key players coming into the game. However, the win over Union Berlin will be a huge boost for the team. After having been used to Champions League football, Dortmund will now look to win the Europa League. The hosts may be without Marius Wolf, Erling Haaland, Marcel Schmelzer, and Thomas Meunier. Mateu Morey, however, is certainly ruled out.

Rangers may no longer hold the top spot in the Scottish league table, but progression to the latter stages of the Europa League will be a huge boost for the club. Manager Giovanni van Bronckhorst does not have too many injury problems apart from Ianis Hagi, while Leon Balogun is a major doubt.

Detailed Analysis of the Stats for Dortmund vs Rangers

FAQs on Dortmund vs Rangers game 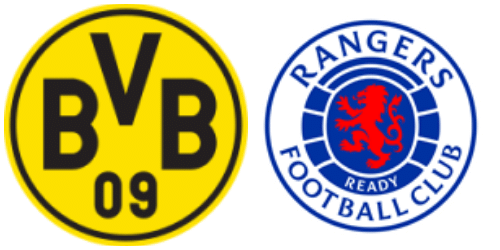 Where is the match going to take place? Signal Iduna Park

Who is the favourite team to win the game? Borussia Dortmund