The opening match of the new Ligue 2 season is the Dijon vs Saint-Etienne duel, so let’s take a closer look at this match, what can happen, and some of our free betting tips for the game.

Our favourite betting picks and predictions for Dijon vs Saint-Etienne

If you need some help to decide what is the right bet for the Dijon vs Saint-Etienne duel, check our top betting tips for this match:

It’s hard to take a look at this game and decide who is the favourite, especially since it is the first round of the new season and both teams have had their ups and downs in recent years.

However, Saint-Etienne played in Ligue 1 last season and they didn’t even get relegated directly, so we would give them the advantage at the start of the new season in the second French league. After all, Dijon didn’t impress last season, finishing it around the middle of the standings.

While we saw three or more goals only twice in the last five h2h duels between Dijon and Saint-Etienne, we can see that happening in this game after all.

Both teams have scored in just two of the previous five head-to-head meetings between Dijon and Saint-Etienne, but we expect to see goals on the both sides of the court in this game.

After all, both teams scored in 53% of all Dijon games in Ligue 2 last season, while the same thing happened in 68% of all Saint-Etienne matches in the league last season.

Dijon vs Saint-Etienne preview: Can the guests start a season with a win?

The last season for Dijon was pretty much an unremarkable one since they finished it right in the middle of the standings in Ligue 2. So, there wasn’t much excitement for their fans in the latter stage of the season and they are certainly hoping that their team can do better in this one, perhaps getting into the top half and pushing for promotion.

After a poor season in Ligue 1 in which they narrowly escaped direct relegation, Saint-Etienne failed to avoid that faith in the playoffs after they lost to Paris FC. So, the famous French club will now play in Ligue 2, looking for a good campaign to bring them back to the top flight after just one season.

The top odds and key stats for Dijon vs Saint-Etienne

If you are looking for the best Dijon vs Saint-Etienne odds, check our selection of odds from the main UK betting sites: 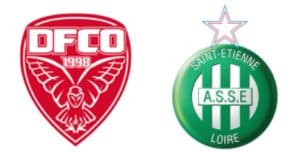