A mid-table fight that has a lot of amazing picks if you are to look closer! Let’s find out what they are together!

Only 1 game was ever played between the two teams and it resulted in a 2:1 victory for Quevilly Rouen at the start of this season. It was a very close one and it could’ve easily resulted in a draw. Both teams seem equal in the Ligue 2 table as well, with Dijon currently in the 11th position and Quevilly Rouen in the 13th with an only 2 points difference.

In the game they played last August, the teams managed to produce a total of 3 goals which, as mentioned above, could’ve easily been a lot more. Chances are the two teams will produce more of the same this Saturday.

Dijon is at the 11th position in Ligue 2 with 26 points – only 5 points away from the relegation zone. The last 5 league games include a recent 0:2 victory over Rodez, a 1:2 loss against Nimes, a 0:3 victory against Nancy, a 2:2 draw with Niort, and a dramatic 3:2 loss against Guingamp. Bruno Manga, Jordan Marie, and Adama Fofana are unavailable for this game due to their injury status and will probably miss the next game as well.

Quevilly is also fighting for survival and is currently ranked 13th with 24 points – only 3 points away from relegation. A victory over Dijon would be a must for this game. There are no injuries or suspensions ahead of this game. The 5 last league games include a recent heavy 3:0 defeat against Bastia, a 2:2 with Caen, a 1:2 victory against Pau, a 2:1 victory against Nancy, and a 0:0 with Toulouse.

Head-to-head data for the Dijon vs Quevilly Rouen game

Those are the key head-to-head statistics and odds for Dijon vs Quevilly Rouen:

Common questions for the Dijon vs Quevilly Rouen: 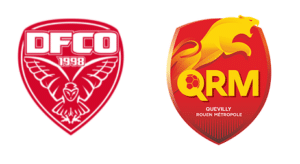