Derry City welcome UCD to The Ryan McBride Brandywell Stadium on Friday in the Premier Division. Top meets bottom in Derry as the Candystripes go in search of more points. Read our free predictions and find the latest odds for the fixture below in our detailed match preview.

Title-chasing Derry are huge favourites to sweep bottom club UCD aside in the Premier Division on Friday. Read our top three predictions for this week’s fixture below.

Derry City to Win to Nil

Derry City are still sitting pretty at the top of the Premier Division, though a disappointing haul of one point from their last two games should renew any slipping focus in their ranks. On Friday, the Candystripes host the league’s bottom club UCD at The Ryan McBride Brandywell Stadium, where Derry should be comfortable winners. City beat the Students to nil earlier in the month and UCD have lost four and failed to register in three of their five away tests since their promotion. With those factors aligned, back the hosts to win to nil this week.

UCD’s opponents on the road have covered the handicap in four out of five away assignments this season and Andrew Myler’s strugglers could be outclassed again when they visit Derry this week. City enjoyed a two-goal buffer when they beat UCD in Dublin on April 4th and they have the quality at their disposal to push for a similarly routine victory on Friday.

Incredibly, UCD have found themselves behind at the interval in 100% of their Premier Division away matches this season and their nasty habit of falling behind as the visiting team can be taken advantage of in the markets this week. Derry have had their noses in front by the break in three out for five home tests this term and a stake on the early leaders to hold a half-time advantage on Friday evening appeals at the odds available.

Michael Duffy and Ciaron Harkin are still on the road to recovery and Friday’s game could come too soon for both. Derry dropped two points in disappointing fashion at Drogheda last time out, though it’s worth noting that that was their fourth away game in five fixtures.

Midfielder Jack Keaney is listed as UCD’s only current injury concern and manager Andrew Myler has options available to him elsewhere. The Students conceded twice late on in a defeat to St. Patrick’s Athletic in their last runout and UCD remain the only team in the Premier Division yet to win a game this term.

Top Betting Odds and Stats for Derry City vs UCD

Make sure to check out our rundown of the top stats for Friday’s game alongside a tool to help you choose the best odds. 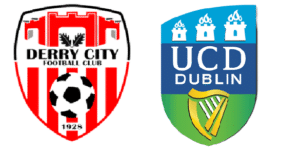 Derry City beat UCD 2-0 when the teams last me on April 4th.

Who is Derry City’s leading scorer this season?

With five goals so far, Will Patching is Derry’s leading scorer in the Premier Division.