Derry City look to remain top of the table when they welcome St Patrick’s Athletic to the Ryan McBride Brandywell Stadium on Monday night.

Derry City’s lead at the top of the table has been cut down to just one point after the 1-1 draw with Bohemians. After back-to-back wins over UCD and St Patrick’s Athletic, this was the first dropped points for Derry City. St Patrick’s Athletic recovered quickly from the recent loss to Derry City with a 4-0 win over Drogheda United.

Derry City have dropped points in three out of the last five matches. Interestingly, the home form has taken a dip for the team, who have failed to win in two out of the last three home matches. St Patrick’s Athletic, though, tend to lose on a regular basis when they go up against Derry City, who have had three consecutive wins against this opponent. St Patrick’s Athletic’s recent successes against Derry City have been at home.

Derry City’s lead at the top has been cut down significantly following the recent two disappointments against Shelbourne and Bohemians. These two recent experiences will push for a better home performance.

St Patrick’s Athletic have had the big disappointment of the loss against Derry City a week ago. However, it remains as the one big setback for the club over the last few weeks. This heavy loss would have provided some degree of knowledge to play the upcoming match. 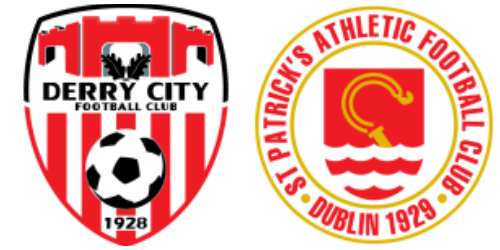 Where is the match going to take place? The Ryan McBride Brandywell Stadium

Who is the favourite team to win the game? Derry City