Crewe and Ipswich meet at the Mornflake Stadium in League One on Saturday. Relegated Crewe take on the Tractor Boys in Cheshire. Read our free predictions and find the latest odds for the fixture below in our detailed match preview.

Crewe have lost nine of their last ten league fixtures ahead of their clash with Ipswich on Saturday. Read our top three predictions for this weekend’s fixture below.

Already relegated Crewe are preparing for life in League Two and the Railwaymen are on track to lose for the tenth time in 11 assignments when Ipswich visit the Mornflake Stadium on Saturday. Crewe have been toppled in eight of their last nine skirmishes on home soil and an Ipswich side aiming to snap a four-match winless run won’t have a better chance to flesh out their W column.

Low-scoring fixtures have been a prominent feature during Kieran McKenna’s tenure at Ipswich and bettors should expect another modest scoreline when the Tractor Boys visit Cheshire to play Crewe this weekend. Ten of Town’s last 11 games in League One have produced under 2.5 goals and that consistent streak should give punters the confidence to stick the same market this week.

Only two clubs have scored fewer goals than last-placed Crewe this season and Alexandra have failed to register in a staggering 62% of their total fixtures over the course of the campaign. Only three teams have kept more clean sheets on the road than Ipswich (seven) and another shut out should be in reach of the Tractor Boys on Saturday against their shot shy hosts.

Crewe could be without Travis Johnson, Scott Robertson, Ryan Alebiosu, Ben Knight, Nathan Woodthorpe and Rio Adebisi this weekend. Tariq Uwakwe came off the bench in Tuesday’s 1-0 loss at Sheffield Wednesday and should be fit enough to feature again on Saturday, while Defender Zac Williams could also be back in the fold following a short layoff.

Kayden Jackson, George Edmundson, Kyle Edwards and Lee Evans are all listed as injured for Ipswich, while Sone Aluko and Kane Vincent-Young are both doubtful. Janoi Donacien played the full 90 minutes of Town’s 2-2 draw with league leaders Wigan on Tuesday and the defender should start again against Crewe.

Top Betting Odds and Stats for Crewe vs Ipswich

View our rundown of the top stats for Saturday’s fixture alongside a tool to help you choose the best odds. 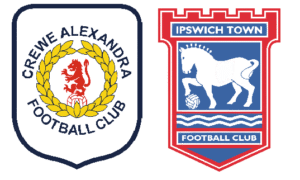 Who is Crewe’s leading scorer this season?

Christopher Long is Crewe’s leading marksman this term with nine goals in League One.