Charlton and Shrewsbury go head-to-head at The Valley in League One on Saturday. Two inconsistent sides clash in an end of season dead rubber. Read our free predictions and find the latest odds for the fixture below in our detailed match preview.

Shrewsbury have lost only three of their last 11 away fixture ahead of their trip to play Charlton on Saturday. Read our top three predictions for this weekend’s fixture below.

Shrewsbury have been a tough nut to crack on the road this season as evidenced by their return of just three defeats from their last 11 away assignments. Charlton meanwhile, have dropped points in five of their last seven tests at The Valley and their habit of dropping the ball on home soil could open the door for the plucky Shews in the double chance market on Saturday.

A last gasp Daniel Udoh strike separated the teams when Shrewsbury (1-0) conquered Charlton back in November and we expect margins to be slim again when the teams lock horns for Saturday’s rematch. 70% of The Shews’ last ten League One fixtures on the road have produced under 2.5 goals and the same market appeals at the prices on offer this week.

Shrewsbury have been awkward visitors for plenty of teams this season and their knack for producing the goods on their travels under Steve Cotterill makes them a backable force in a niche market this weekend. Charlton have conceded the first goal in each of their last two tussles at The Valley and the nervous hosts could ship the game’s opening effort again on Saturday.

Sam Lavelle and Deje Elerewe are both out injured for Charlton, while Scott Fraser and Elliot Lee – who both sat out Tuesday’s 2-0 win at Cambridge – remain doubtful. In better news, defender Ryan Inniss is available again following his suspension. With two games left to play, the Addicks can only finish as high as 12th.

Shrewsbury could be without injured trio David Davis, Elliott Bennett and Ethan Ebanks-Landell again this weekend. The Shrews three away a three-goal advantage to draw with Doncaster on Monday and manager Steve Cotterill will be demanding defensive improvement at The Valley on Saturday.

Top Betting Odds and Stats for Charlton vs Shrewsbury

Check out our rundown of the top stats for Saturday’s fixture alongside a tool to help you choose the best odds. 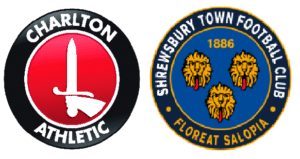 Who is Charlton’s manager?

The bookmakers have priced Charlton as their favourites to win on Saturday.