Charlton and Lincoln clash at The Valley in England’s League One. Can the Addicks push for victory again when they take on The Imps? Read our free predictions and find the latest odds for the fixture below in our detailed match preview.

Charlton are chasing their fourth win on the spin when they welcome Lincoln to London. Read our top three predictions for this weekend’s fixture below.

The international break came at an inopportune time for Charlton, who had started to build a powerful head of steam before the pause button was pressed on the club campaign. Athletic have won three games on the bounce in the third tier and they should be able to add a fourth victory to that sequence when they host a Lincoln side that has won only one of their last five assignments.

Both Charlton and Lincoln have been involved in a number of low-scoring tussles in recent weeks and a stake on under 2.5 goals when these shot-shy sides lock horns could be worth considering as a result. Six of the Addicks’ last seven fixtures produced two or fewer goals, while four of Lincoln’s last five matches also fell below the same totals line. With margins expected to be slim on Saturday, back under 2.5 goals to rattle the net again.

With goals expected to be at a premium this weekend, backing both teams NOT to score at The Valley looks a solid option at the prices on offer. One team failed to score in seven of Charlton’s last eight and in five of Lincoln’s last seven league games, and with both camps low on reliable goal-getters, a stake in the same market could prove profitable.

Ryan Inniss, Deje Elerewe, Chuks Aneke and Jake Forster-Caskey could all miss out for Charlton this weekend. The in-form Addicks could clamber into the top half of the League One table with a favourable set of results on Saturday. Charlton have lost just seven of their 20 home fixtures this term.

The injury picture looks relatively clear for Lincoln, who have listed Liam Bridcutt and Lewis Montsma as their only major injury concerns. The Imps have only won six of their 19 away fixtures this term and their poor record on the road has kept them closer to the foot of the table than the top.

Top Betting Odds and Stats for Charlton vs Lincoln

Below, you can find our list of the top stats for Saturday’s game alongside a tool to help you pick the best odds. 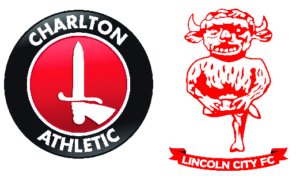 Where are Charlton in the League One standings?

Charlton are currently in 14th position in League One.

Charlton vs Lincoln will be contested at The Valley.