Ajax are very much in a battle for the title and three points here would go a long way to securing that crown. Can they get the win they desire? Find out with our Cambuur vs Ajax preview here along with the predictions and free tips we mention along the way.

Ajax to lead at the break

Ajax have been by far the highest scoring team in the Eredivisie this season; they’ve scored 74 goals in 25 league games, that’s almost 3 goals per game. Due to their goal scoring ability, Ajax tend to score first; they’ve done so in nine of their last 10 games in all competitions. It’s worth noting that Erik ten Hag’s men led at half-time in eight of those 10 games. Similarly, Ajax drew first blood in four of their last five clashes with Cambuur; they’ve met Cambuur eight times, and were leading at half-time in five of them. With this in mind, we’re making the prediction that Ajax will lead at half-time.

Ajax have actually conceded the fewest number of goals in the Eredivisie; however, they’ve allowed a lot of goals recently. Erik ten Hag’s men have had their defence breached in three of their last four games; they conceded six goals in those four games alone. In the same vein, Cambuur have scored and conceded a lot of goals; they’ve conceded in all of their last five league games, whilst scoring in four of them. Both teams scored in three of Ajax’s last four games, and in four of Cambuur’s last five league games; and on that note, both teams should find the net.

Ajax will win but concede too

We would like to point out that Ajax have played eight games against Cambuur in the past 10 years; they’ve won six of those eight games, with a draw and a loss. Additionally, it’s worth mentioning that both teams scored in five of those eight encounters. We’ve pointed out that both teams scored in four of Cambuur’s last five league games; to be fair, they lost four of those games. Ajax have won 19 of 25 league games this season; they shouldn’t have too much trouble winning this game. However, considering both teams have conceded their fair share of goals recently; we believe that Ajax will win whilst conceding at least one goal.

The best odds for Cambuur vs Ajax

Cambuur are coming off a 1:0 loss at Twente; they’ve lost four of their last five league games, and have won just one of their last nine league games. Henk de Jong’s men will hope for better results as they welcome Ajax to the Cambuur Stadion; Tom Boere is the man to look out for.

Ajax have been the best team in the country this season; they are coming off back-to-back wins, and they’ve won 12 of their last 14 games across all competitions. Erik ten Hag’s men are just two points clear at the top of the table, and they’d like to maintain that spot; all eyes will be on Sebastien Haller.

The final word on Cambuur vs Ajax 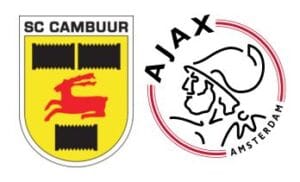