Caen and Dunkerque face each other in Round 31 of the Ligue 2, 2021/22 season. That means we will have 7 games to spare after this weekend’s fixture. Read this preview to find out how we have predicted this game to end based on extensive analysis of data and all the available relevant information at the time of writing.

Caen vs Dunkerque: Free Tips and Predictions by Punditfeed

Punditfeed is the go-to website for the best Ligue 2 predictions, betting tips and analysis. Our best three predictions for the Ligue 2 match between Caen and Dunkerque are premised on extensive data and information analysis. See how we have tipped these teams to perform on matchday below.

We anticipate victory for Caen in this fixture. The hosts have played against Dunkerque four times, twice won and twice drew. They are currently at a higher position on Ligue 2 table than Dunkerque. Recent stats prove our pick too. The hosts have lost only once in the last five games but with a narrow margin of 1-0 defeat. They bagged three wins and one draw in the other four games. On the contrary, Dunkerque lost three and won twice in the last five outings. The last two away games for Dunkerque were defeats of 2-0 and 1-0.

Caen to be ahead at the break

Eleven points off tip five is a distant race for Caen. However, with eight games to play, winning this game could offer some hopes to the hosts. They scored nine goals in the last three games, which is a better record than Dunkerque that scored only two goals in as many previous Ligue 2 engagements. An early goal for Caen is expected in this game and so is an early lead in the first half.

Despite Caen being our favourite to score first and win altogether, the biggest challenge for the hosts is keeping clean sheets. They have failed to record a clean sheet in the last six games. The visitors have one clean sheet from the last six matches. With that, defensive challenges could the catalyst for goals in this game on Saturday.

A quest for promotion next season is motivating enough for Caen ahead of this game against Dunkerque. But will they make it to the promotion playoff places at the end of the season?

Caen needs points to have chances of taking part in promotion playoffs. Currently, they are 12 points shy of the top five places. That means they must win at least four of their last four matches, assuming fifth-placed Sochaux failed to bag victory in their next eight matches. Most important for Caen is home support in this game.

19th placed Dunkerque is facing the possibility of getting relegated to the National 1 tier. However, they have a chance to mount a strong challenge in a quest for survival points. The last two meetings ended 1-1 and with only a two-point deficit from safety, the only challenge for the visitors is weak defending.

Find out which top UK bookies have the best odds for this Ligue 2 match as well as more stats for these teams in the tables below. 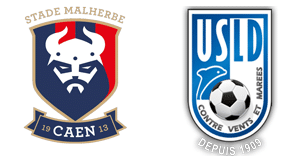 Where is this match taking place?

Which side won in the reverse game?

What is the kick off time for Caen vs Dunkerque?