One of the three Bundesliga 2 matches to be played on Sunday is the Braunschweig vs Greuther Furth duel. So, make sure to check our preview of the game to learn more about it and to get some free betting tips.

If you are struggling to choose the right bet for Braunschweig vs Greuther Furth, check our betting tips for this game right here:

After a slow start, Braunschweig is not without a loss in their last eight games in the league. Meanwhile, Greuther Furth is also in good form at the moment with one loss in the last six games.

That being said, Braunschweig is four points ahead of Greuther Furth right now and clearly in better form. They are also hosting the match, so we can see them winning it, even though we do expect a close game.

The last four head-to-head duels between Braunschweig and Greuther Furth have all gone over 2.5 total goals and we can see that being the case on Sunday too.

We only saw both teams score in one of the last five h2h meetings between Braunschweig and Greuther Furth. Despite that, we can see this happening in their next duel.

After all, both teams have scored in a whopping 86% of all Greuther Furth games in the league so far, while the same is true for 57% of all Braunschweig matches in Bundesliga 2 this season.

With four wins and four draws in the last eight games, Braunschweig has been on a tear recently and they have escaped the relegation zone thanks to their string of good results. Right now, the team has seventeen points and they are close to the middle of the standings. Luc Ihorst, Philipp Strompf, Mehmet Ibrahimi, and Brian Behrendt are out with injuries right now.

Although they’ve done ok recently with two wins, three draws, and just one loss, Greuther Furth remains in the relegation zone in Bundesliga 2, but they are now very close to escaping it, one point behind the first team outside of relegation zone. Meanwhile, Sidney Raebiger and Robin Kehr are on the team’s injury list at the moment.

The best odds and key stats for Braunschweig vs Greuther Furth

If you want to bet on the top Braunschweig vs Greuther Furth odds, check our selection of odds from the best UK bookies: 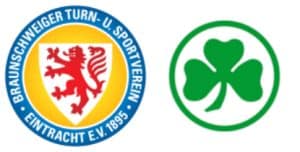