After the successful Europa League negotiation with Sheriff, Sporting Braga welcome Santa Clara to the Estádio Municipal de Braga for a league meeting on Monday night.

Despite trailing 2-0 from the first leg, Sporting Braga utilised home advantage to produce a sharp comeback against Sheriff and progress into the last 16 of the Europa League on penalties. During the weekend, the team managed a narrow win over Tondela. Santa Clara were unable to hold onto a lead for the third consecutive game after a 1-1 draw with Portimonense.

Ricardo Horta has been excellent for Sporting Braga so far this season. He is already enjoying his best season with the club after managing 14 goals in 21 appearances. The 27-year-old has been able to score in four out of the last five matches for Sporting Braga and he even grabbed a brace against Pacos Ferreira in Braga’s last home match.

Sporting Braga have been one of the top scoring teams in the Portuguese Primeira Liga so far this season. The club has managed to grab 40 goals with just eight of them coming in the last six matches. Santa Clara have ended up scoring more than Braga in the last six matches, as they have picked up 10 goals during this period. The games between Braga and Santa Clara have been filled with the last two games.

Santa Clara might be outside the top half of the table, but they have been scoring plenty of goals over the last few weeks. Sporting Braga have not been exactly solid when it comes to the defence with the time shipping almost a goal per game in the last six games.

Braga manager Carlos Carvalhal has had a brilliant run against Santa Clara with just one loss against the club. The 56-year-old is also high after getting his team into the last 16 of the Europa League. However, Braga are without several players like Paulo Oliveira, Roger Fernandes, Andre Horta, Nuno Sequeira, and Lucas Mineiro.

Santa Clara might have been scoring a lot of goals in recent games, but Mario Silva has still been unable to solve the defensive issues that plague the club. For the upcoming game, the young manager might be without Anderson Carvalho, while Costinha is a long-term injury problem for the club.

Detailed Analysis of the Stats for Braga vs Santa Clara 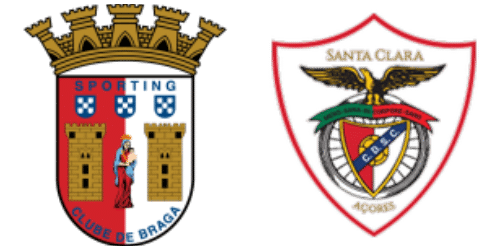