Sporting Braga look to get revenge for the heavy loss suffered at the hands of Benfica back in November when they go up against the third-placed outfit at the Estadio Municipal de Braga on Friday night.

Braga were able to pick up a second victory in four matches after beating Portimonense 2-1 away from home. Early goals from Francisco Moura and Yan Couto were able to provide a victory for Braga despite a late comeback from Portimonense. Benfica continued with the recovery by beating history 2-1 at home. Rafa Silva and Goncalo Ramos were able to score the crucial goals for Benfica.

Benfica have picked up four wins in the last five matches. There is a potential for manager Nelson Verissimo resting several players in the squad ahead of the crucial Champions League game with Liverpool. Even then, Benfica are likely to have more in the tank based on the performances of putting Braga in recent matches.

There have been more than 2.5 goals in four out of the last five Primeira Liga matches involving Benfica, who have been scoring and conceding goals at the same time. Even though Braga are yet to hit the best form, there are certainly reasons to be worried ahead of this game.

In the last five league outings for Benfica, there have been goals at both ends in four matches. The late goal from Estoril just before the international break is once again a sign of the defensive weaknesses of Benfica.

Braga come into the game without some crucial names in the squad due to injuries. Manager Carlos Carvalhal might have sensed a great opportunity to finish in the top two a few weeks ago, but that hope has disappeared with the team falling 18 points behind Sporting CP. Nuno Sequeira, Roger Fernandes, Vitinha, and Jean-Baptiste Gorby are missing due to injury.

Benfica boss has many big decisions to make ahead of the weekend’s match against Sporting Braga. The Champions League match against Liverpool is a huge factor, as Benfica have little reason to go for points in the Primeira Liga. Haris Seferovic, Rodrigo Pinho, and Lucas Veríssimo are out due to injuries.

Detailed Analysis of the Stats for Braga vs Benfica

FAQs on Braga vs Benfica game 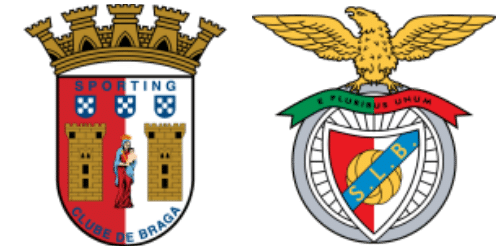