Bolton are fresh from a midweek defeat that has once again raised questions about the promotion ambitions, as they welcome Wimbledon to the University of Bolton Stadium this weekend.

Bolton were completely undone by set piece situations, as they fell to a 3-1 loss at the hands of Burton Albion. An early goal from Joe Powell and a brace from John Brayford provided a crucial win for the hosts, while Dion Charles grabbed a late consolation for Bolton. Wimbledon’s winless run continued following a 1-1 draw at Sunderland during the weekend. Luke McCormick’s penalty was cancelled out by a brilliant freekick from Pritchard.

Bolton and Wimbledon have been very closely watched teams in recent years. There have been four consecutive draws whenever these two teams have met each other. Wimbledon have the potential to threaten from set pieces, which turned out to be an Achilles heel for Bolton in the recent loss against Burton. A remarkable six out of the last nine matches for the Wimbledon has been a draw.

The volume of high-scoring matches has been quite high of late. Bolton have witnessed over 2.5 goals in three consecutive games while Wimbledon have managed to witness the same in 50% of their last four games. Even though Bolton have been conceding far too many goals than they would prefer, this match could be a tight game.

Wimbledon have been able to get goals in four out of the last five league matches. They have only failed to score against Rotherham in this run. Even though Bolton’s overall form might be good, they have now failed to keep a clean sheet in four consecutive matches.

Bolton vs Wimbledon: League One Match Preview and Analysis

Bolton were completely out of sorts in the first half against Burton Albion. The disappointing defeat in the midweek could result in some changes, while coach Ian Evatt is also hampered by some injury problems. Keiran Lee is doubtful for the game while Josh Sheehan, Lloyd Isgrove, and Elias Kachunga are unavailable because of injuries.

Wimbledon will be without the suspended Luke McCormick, who picked up a red card in the last game against Sunderland. Aaron Pressley and Henry Lawrence are players who could also miss out due to injuries, while Anthony Hartigan is all set for a comeback.

Detailed Analysis of the Numbers for Bolton vs Wimbledon

FAQs on Bolton vs Wimbledon game 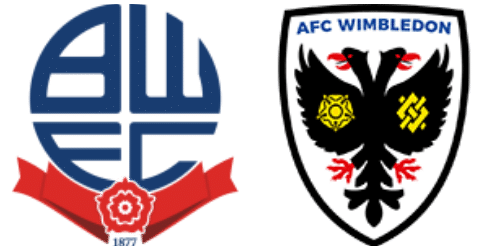 Where is the match going to take place? University of Bolton Stadium

Who is the favourite team to win the game? Bolton