After 20 games, there is very little between these sides in the league standings. Can Besiktas take the win to leapfrog their visitors? Find out with our Besiktas vs Gaziantep preview here along with the predictions and free tips we mention along the way.

Besiktas to take the points

Despite Gaziantep’s good run, they have mostly struggled on the road this season. Gaziantep have been the best home team in the Super Lig; they have no losses in 12 home games, with 10 wins and two draws. On the road however, they have managed just one win, with two draws and seven losses from ten road games. It’s worth noting that Gaziantep have not fared well whenever they visit Besiktas. Besiktas have won all of the last five times they hosted Gaziantep. Besiktas have also been one of the best home teams in the Super Lig; they’ve won 70% of their home games this season. Considering Gaziantep have lost 70% of their away games, we believe that Besiktas will win.

Besiktas have been one of the highest scoring teams in the Super Lig; only league leaders Trabzonspor have scored more goals than Besiktas this season. Onder Karaveli’s men have found the net in six of their last seven games. Conversely, Besiktas have conceded more goals than most teams in the Super Lig; and as a result, their games tend to be on the high-scoring side. Both teams have scored in five of Besiktas’ last seven games in all competitions. Similarly, Gaziantep have scored in eight of their last nine games whilst conceding in seven of them; both teams have scored in seven of those nine games. Considering both teams have found the back of the net in four of the last six encounters between these sides, we’re making the prediction that both teams will score.

Clashes between these two have mostly been high-scoring; as seven of their last eight meetings have gone over 2.5. Also, the last five times Gaziantep visited Besiktas, they scored at least three goals. We’ve mentioned that Besiktas have scored and conceded a lot of goals; we should also point out that four of their last five league games went above the 2.5 goal mark. In like manner, six of Gaziantep’s last eight league games saw at least three goals scored; with this in mind, we should expect a few goals in this match.

The best odds for Besiktas vs Gaziantep

Besiktas vs Gaziantep: Meet the teams

Despite dominating from start to finish, Besiktas couldn’t beat Caykur Rizespor on Sunday; they were held to a 2:2 draw, which leaves them at ninth place on the Super Lig table. Besiktas will look to take all three points as Gaziantep come visiting. All eyes will be on Michy Batshuayi today.

Gaziantep are enjoying their best ever season in the Super Lig; they are seventh in the table, just two points behind a UEFA Conference League spot. Gaziantep will be eyeing their fifth consecutive win across all competitions as they visit Besiktas. It’ll be interesting to see if Joao Figueiredo will fire his team to victory.

The final word on Besiktas vs Gaziantep 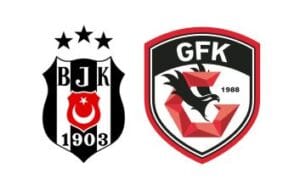