Benfica go in search of a remarkable ninth consecutive victory at the start of the season when they take on Vizela at the Estádio do Sport Lisboa e Benfica.

Benfica were able to overcome Pacos Ferreira with a 3-2 victory. This was the eighth consecutive victory in all competitions for Benfica this season. Despite decent performances, Vizela saw their winless run stretch to 3 matches following the 2-2 draw with Gil Vicente.

Benfica to get victory in both halves

Benfica have been able to pick up a victory in both halves of the game on three occasions in just four league outings. This is quite a remarkable record that will faze Vizela even if the opposition have made a decent start. Vizela have been in a winning position only on one occasion in eight 45 minute halves so far this season. Even though Benfica struggled in this fixture last season, this game could be a lot different.

The last game between Benfica and Vizela to produce more than 3.5 goals was back in 2017. Since then, many of the games between the two clubs have been very tight. Benfica, though, come into the match after having scored three goals in three consecutive games. Meanwhile, Vizela have produced decent attacking performances so far this season.

Even though Benfica have been very hard to break down, Vizela might just be able to score in a third match against Benfica in four games. Vizela have not scored only once this season and Benfica come on the back of conceding two goals in the recent game.

Benfica are showing no signs of slowing down with the team registering consecutive wins on a regular basis. The team has now managed eight consecutive victories, but it is quite possible that manager Rodger Schmidt will have to think about tiredness, as Christine have been constantly playing in domestic and European games. Morato is doubtful for the game while Lucas Veríssimo and Joao Victor remain on the sidelines.

Vizela might have put together a solid set of displays up until now, but the recent match against Gil Vicente produced one of the best attacking performances from the team in recent weeks. This will be a major boost for coach Alvaro Pacheco as he targets his first victory against Benfica. Friday Etim is the player out of action for the team.

Stats, H2H, and Numbers for Benfica vs Vizela

FAQs on Benfica vs Vizela game 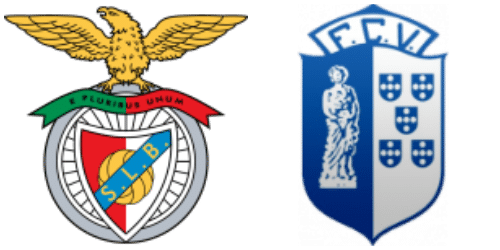