Benfica hope for another spectacular victory over Santa Clara when they welcome the 10th placed outfit to the Estádio da Luz this weekend.

Benfica are fresh from the 3-1 victory over Tondela as it helped the team recover from back-to-back losses in different competitions. Benfica raced to a 3-0 lead by the 53rd minute, but a 10-men Tondela did pull a consolation late in the game through a set piece. Despite playing with 9-men, Santa Clara took the lead twice and ended up losing both in the 2-2 draw with Gil Vicente.

Benfica have been winning at half-time and full-time in 50% of the recent six league outings. Even though the team comes from the back of three losses in the recent three games, Benfica played really well in the victory over Tondela. Santa Clara struggle defensively and it is amplified when they go away from home.

The defensive problems of Santa Clara and Benfica are likely to present opportunities for both clubs in plenty. Santa Clara remain a mediocre defensive outfit and it is reflected by the time conceding a whopping 39 goals in the league already. The reverse fixture produced a big 5-0 win for Benfica. The recent six meetings between Benfica and Santa Clara has produced over 2.5 goals on five occasions.

Benfica remain hopeful that the likes of Porto and Sporting Lisbon drop points over the next few weeks. Still, the possibility of winning the title might have gone away with the team a whopping 12 points behind the top. Manager Nelson Verissimo is still missing a lot of players like Haris Seferovic, Gilberto, Lucas Verissimo, Roman Yaremchuk, Rodrigo Pinho, and Joao Mario due to injuries.

Santa Clara have gone five games without a defeat in the Primeira Liga and they are currently at the highest point in the campaign. The club are increasingly confident about making a late push for the European spots. There are no major injury problems for coach Mario Silva apart from Costinha, while Cryzan and Lincoln are suspended.

Analysing the Stats for Benfica vs Santa Clara 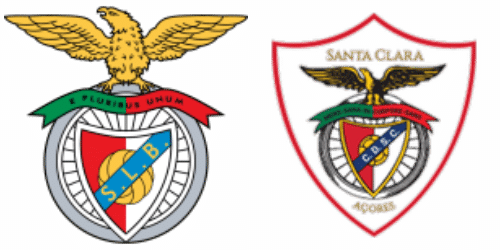 Where is the match going to take place? Estádio da Luz