Bastia holds the key to Auxerre’s march to tip five-finish this season. The visitors are in fourth position but a loss in this game could put them under pressure in the quest for participation in the promotion playoffs. Read our detailed analysis of the Ligue 2 game to find out our best three picks as well as the bookies that the best betting odds for this game.

Bastia is sixth points above relegation zone. They must fight on to gather more points with eight games to spare or risk fighting a survival battle in the last quarter of the 2021/22 Ligue 2 season. Here are the best three predictions for Bastia vs Auxerre:

The visitors to open the score

We expect Auxerre to score the first goal in this Ligue 2 match against Bastia. The quest for top five has never been more urgent and for fourth-placed Auxerre, staying in top five is a priority ahead of this game. They have the second-best away stats after 8W, 5D and 2L in 15 trips. And while Bastia hasn’t lost at home this season after 4W and 11D, the hosts are struggling to score goals. Bastia netted three goals in the last five home matches of 1W and 4D. On the flip-side, Auxerre scored seven goals in the last five trips, during which they bagged three wins and two draws.

The visitors will win

We expect away victory in this game. The visitors have proved they can do better to remain in top five. Three wins from the last three trips is a proof to that. They have the scoring form compared to Bastia that has failed to impress in the final third. A narrow victory for Auxerre is our tip for this Ligue 2 game.

Last tip for Bastia vs Auxerre backs a low scoreline. We are tipping fewer than three goals at full-time. A narrow win for Auxerre is our expectation on matchday and it could be a 1-0. The hosts have been solid on home soil, where they haven’t lost a game since the new season kicked off. Bastia should fight for points and in the event that they lose, it will be by a narrow margin.

Our match preview sheds more light on this Ligue 2 duel between Bastia and Auxerre. Read below.

Bastia is 14th after 30 games in Ligue 2. It is a position that leaves them only six points above the relegation playoff spot. However, their quest for survival points is facing a hitch against a stronger opponent in Auxerre. And while home advantage should hand Bastia hope in this fixture, the away of a team defeated them 1-0 in the first leg. Both teams have improved and so, we expect a fair game that will end with few goals at full-time.

A competitive duel between Bastia and Auxerre will determine which side bags all the points in Saturday. A small setback in the last game, largely due to a red card handed Auxerre an unexpected defeat of 2-1 in the last game. However, we expect them to bounce back in this fixture to win or get at least a point.

Take advantage of our handpicked odds from top UK bookies in the tables below and place your bet on any of our picks above. 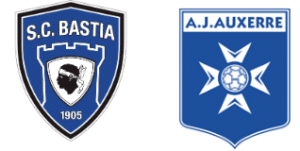 Which stadium will host this Ligue 2 game?

Bastia vs Auxerre will be played at Stade Armand Cesari in Bastia, France.

AJ Auxerre bagged a 1-nil victory in the reverse match.

How how the head coaches of these teams fared against each other previously?

Bastia’s coach, Brouard has 1W while Auxerre’s Furlan boasts 3W in previous encounters. One game in five encounters between the tacticians ended square.