Europa League Round of 16 playoffs gives the fans a treat to watch on Thursday night. Barcelona hosts Napoli after a draw in the Catalan derby while the Partenopei held Serie A champions Inter Milan to a stalemate.

Free Match Tips from Punditfeed for Barcelona vs Napoli

Here are some bias-free tips we have put together for Barcelona vs Napoli.

Napoli made the Serie A title race interesting by holding off Inter Milan at the Stadio Diego Armando Maradona. They will be in high spirits against Barcelona, who themselves could not get over the line against Espanyol. However, we are backing Xavi’s men to claim the three points on offer in this first leg. They are unbeaten in 8 La Liga outings and their last home fixture saw them overcoming the challenge of Atletico Madrid. Three of their last four meetings with the Italians have concluded in their favour and we expect that tally to increase.

Lionel Messi will not feature anymore for Barcelona but the Catalans have enough firepower in their ranks to make it an interesting affair. Four of their last five fixtures have concluded with Over 2.5 total goals and it should be the case on Thursday night. Napoli can be relied upon to add to their tally as the Partenopei do not back down to anyone. Three of their last four meetings concluded in this manner and we should see the continuation of this trend.

Xavi’s arrival at Camp Nou has added stability to their ranks. However, they remain susceptible at back and have only kept one clean sheet in seven competitive fixtures. In this situation Napoli will be tough to manage as they have scored in their last nine away fixtures, defeating AC Milan at the San Siro while giving Juventus and Inter Milan a tough time in this period.

When Barcelona have to wait for Fergie Time to get a draw against crosstown rivals, it exemplifies how the mighty have fallen. Xavi’s charges are a work in progress and have been assembled with free transfers on high salaries. It will be some time that they recover their stature back. A good run in the Europa League is expected of them but they could not have picked a tougher opponent than Napoli to get past.

Luciano Spalletti will be eager to test the resolve of Barcelona. He has an experienced squad at his disposal, one that has played with one another for quite some time. A stark contrast to their rivals who are forging new partnerships following a busy transfer window. They will be confident of their chances with Barcelona missing seven players while only Hirving Lozano is missing for them.

Looking for the best odds for Barcelona vs Napoli? We’ve got you covered. Check out our list of odds from the popular bookies and a few important stats to help you make a good prediction.

FAQ about Barcelona vs Napoli 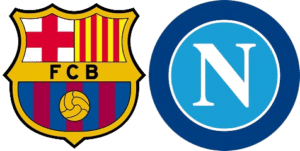 Where is the game being televised? BT Sport ESPN, COSMOTE Sport, Cytavision Sports, and DAZN Italia.

What was the last H2H result? Barcelona beat Napoli with a 3-1 scoreline.