This clash is a big one between two clubs vying for European football next season. Who wins it? Find out with our AZ vs Twente preview here along with the predictions and free tips we mention along the way.

AZ to win it

Our last prediction for this game will be on the over/under goals market. Clashes between these sides have produced a lot of goals; seven of their last eight meetings went above the 2.5 goal mark. Similarly, both teams have been involved in a lot of high-scoring games recently; Seven of AZ Alkmaar’s last eight games went over 2.5. Also, four of Twente’s last five games saw at least three goals scored. On that note, we should expect a few goals in this game.

The best odds for AZ vs Twente

Things have not gone too well for AZ Alkmaar this month; they’ve lost two of three games they’ve played in March, which includes a KNVB Beker exit. AZ Alkmaar will look to take all three points as Twente come visiting; will Jesper Karlsson lead his team to victory?

Twente are coming off consecutive wins against Cambuur and Waalwijk; they will look to go level on points with AZ Alkmaar by winning this game. Twente have not won three games in a row since December; they’ll look to do so with the help of Ricky Van Wolfswinkel.

The final word on AZ vs Twente 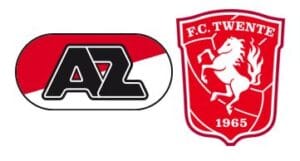