AZ and Feyenoord clash in a showpiece showdown in the Eredivisie on Sunday. Two of the league’s top four teams face off in Alkmaar. Read our predictions and find the latest odds for the fixture below in our expert match preview.

AZ and Feyenoord are both in excellent form ahead of their tussle in Alkmaar on Sunday. Read our top three expert predictions for this weekend’s fixture below.

Two of the Eredivisie’s strongest outfits will wage war in Alkmaar on Sunday when AZ and Feyenoord clash and we’re tipping goals to be notched at both ends by these high-calibre sides. Alkmaar have potency to burn up front and their run of scoring in 13 of their last 14 matches suggests they will register, while Feyenoord have failed to score in just one of their 11 Eredivisie away fixtures in 2021/22.

AZ and Feyenoord have been playing with a real swagger in recent weeks and with both frontlines purring, we expect an exciting tussle in Alkmaar. Six of the host’s last seven domestic matches flew past the over 2.5 totals line, while 65% of Feyenoord’s total Eredivisie fixtures this season have also produced three or more goals. Both teams are certain to play with plenty of attacking intent on Sunday and the goals should flow again as a result.

Greek attacker Evangelos Pavlidis is in superb form for AZ and the 23-year-old rammed home four goals in his last three runouts for AZ. Pavlidis is one of six players currently on double figures for the campaign in the Eredivisie and the lethal finisher is a standout candidate in the anytime goalscorer market again this weekend.

Feyenoord beat Alkmaar 1-0 when the teams last met in November, though AZ haven’t lost in 17 fixtures since. Ahead of Sunday’s rematch, Pascal Jansen’s charges have claimed a remarkable 13 wins in their last 14 games and they could close to within three points of Feyenoord with the right result at the AFAS Stadion. Jansen has close to a full squad to choose from this weekend.

Feyenoord won for the fourth time on the bounce in the Eredivisie when they came from behind to beat Cambuur 3-1 in Rotterdam last weekend and Arne Slot’s side are just one point shy of PSV in second spot. Feyenoord haven’t lost on the road since October, though their fine run away from home could come under threat on Sunday.

Top Betting Odds and Stats for AZ vs Feyenoord 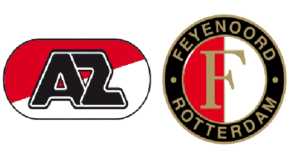 Sunday’s game between AZ and Feyenoord will be played at the AFAS Stadion.

Who is Feyenoord’s leading scorer this season?

With 13 Eredivisie goals, Guus Til is Feyenoord’s leading marksman this term.