This is one of the biggest matchups in Austrian football. Who will come out on top as they clash? Find out with our Austria Vienna vs Sturm Graz preview here along with the predictions and free tips we mention along the way.

We kick off our tips for this match by backing Sturm Graz to win. Austria Vienna have struggled for form of late with just one win in five matches. Sturm Graz meanwhile are in decent form with just one loss in five; they’ve won three of the other four games. On top of that, Sturm Graz have chalked up wins in three of the last five head to head clashes. It wouldn’t be the biggest shock to see it happen again and, given the odds, it’s got decent value too.

Our next tip backs this to be a game of a few goals – specifically over 2.5 goals. Austria Vienna have gone over the 2.5 marker in three of their last five with an average of three goals per game. Sturm Graz have recorded north of 2.5 in four of their last five matches totalling 16 goals; an average of 3.2 per match. Four of the last five head to heads have seen at least three goals too.

Graz to win by one

We might fancy Sturm Graz to win this match but we do not see it being a slam dunk, crushing victory. Austria Vienna are unbeaten in three games and only one of their last five games has been settled by more than the solitary goal. Throw into the mix that each of Strum Graz’s three most recent wins have been by just one goal and you’ve got yourself a decent looking bet.

The best odds for Austria Vienna vs Sturm Graz

Austria Vienna will be looking at this match knowing a victory is big news given how close the teams below them are, however, it won’t be easy because their record against Sturm Graz isn’t great. In Marco Djuricin though they do have someone who can stick the ball in the net; that always gives you a chance.

Sturm Graz already know what their fate holds but they’ll still want to get one over Austria Vienna; after all, they won’t roll over in what is one of the biggest games in the Austrian calendar. They’ve got serious firepower up top and have multiple goalscorers; the sharpest shooter of the lot is Jakob Jantscher who has five goal contributions in his last three.

The final word on Austria Vienna vs Sturm Graz 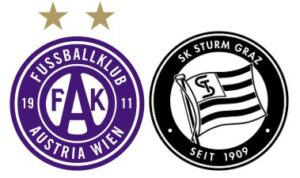