Beerschot remain rock bottom of the Belgian Pro League whilst Antwerp still have an outside shot at the title. Will this game play out according to league position? Find out with our Antwerp vs Beerschot preview here along with the predictions and free tips we mention along the way.

Beerschot have been by far the worst team in the First Division A this season; they’ve played 29 league games so far, and they’ve lost 21 of them. It’s worth noting that Beerschot have won four of their 29 league games; however, those four wins were at home. Beerschot have no wins away from home this season; they’ve played 14 road games, with three draws and 11 losses. It doesn’t help that Beerschot will be facing a Royal Antwerp side that has beaten them in three consecutive encounters; Antwerp have no losses in five clashes between these two, with four wins and a draw. Considering Antwerp have won five of their last nine games; while Beerschot have lost all of their last three games, Antwerp should win.

We will see both sides score

Beerschot have conceded the highest number of goals in the league this season; they have no clean sheets in their last 15 games across all competitions. However, despite their poor form, Beerschot have scored a lot of goals recently; they found the net in seven of their last nine games. Similarly, Antwerp have scored in 17 of their last 18 games; on the other hand, they’ve conceded six goals in their last two games alone. Considering both teams scored in seven of Beerschot’s last nine games, we should expect goals at both ends.

Hosts will open the scoring

The best odds for Antwerp vs Beerschot

Antwerp have had a poor run of results that has seen them drop to third on the table; they are coming off consecutive losses, and have lost three of their last four games. Brian Priske’s men will hope to bounce from those losses as they take on Beerschot; make sure you keep an eye out for Michael Frey.

Beerschot have been the worst team in the First Division A this season; they’ve lost their last three, and five of their last seven games. Beerschot will fancy their chances against a struggling Antwerp side; it’ll be interesting to see how they’ll fare with Lawrence Shankland spearheading the attack.

The final word on Antwerp vs Beerschot 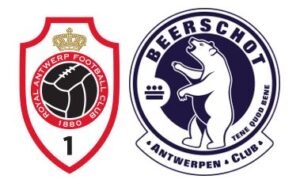