Anderlecht are in a good position to make it to the Championship round but they still have work to do. Can they grab three points here? Find out with our Anderlecht vs Oostende preview here along with the predictions and free tips we mention along the way.

Anderlecht to win it to nil

Anderlecht have the head to head advantage in this fixture, especially at home; they’ve won seven of the last 10 times Oostende came visiting, losing just once. Furthermore, Oostende have won just one of their last five games; it’s even worse considering they failed to score in three of their last four games. In contrast, Anderlecht have been one of the best teams in Belgium this season; they have won four of their last five games, and are unbeaten in their last six games. Additionally, Anderlecht kept two clean sheets in their last three games, conceding just one goal. With this in mind, Anderlecht will likely win this match, they should also keep a clean sheet in the process.

No way both sides score

Oostende have struggled in front of goal recently; they blanked in three of their last four games, scoring just one goal in those four games. It’s worth noting that Oostende’s games have mostly been one-sided when it comes to goals; at least one side failed to score in all of their last four games. On the other hand, Anderlecht have kept three clean sheets in their last seven league games, whilst failing to score in two of them; both teams scored in just two of Anderlecht’s last seven league games. We should expect at least one of these teams to keep a clean sheet.

The best odds for Anderlecht vs Oostende

Anderlecht advanced to the final of the Belgian Cup by knocking out Eupen a couple of days ago; they now have four wins in their last five games. Vincent Kompany’s men are unbeaten in six games, and they’ll look to extend that run; all eyes will be on Joshua Zirkzee.

Oostende have had some mixed results recently; they have one win, two draws and two losses in their last five games. Oostende will hope to improve their poor form as they visit the Lotto Park; it’ll be interesting to see how they’ll fare with Makhtar Gueye leading the attack.

The final word on Anderlecht vs Oostende 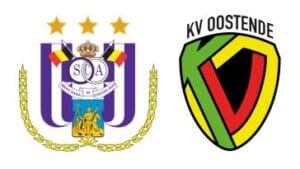