Altay and Galatasaray face off in İzmir in the Turkish Super Lig on Sunday. Can the hosts pull off an upset against ailing giants Galatasaray? Read our free predictions and find the latest odds for the fixture below in our detailed match preview.

Galatasaray are hoping to avoid their fourth away defeat on the spin when they travel to take on Altay. Read our top three predictions for this weekend’s fixture below.

Galatasaray are counting down the days until the season ends following a rotten campaign for the club and having suffered three away defeats on the spin in the Super Lig, Gala look like vulnerable visitors again on Sunday. Altay are all but doomed near the foot of the table, though they have shown plenty of fighting spirit in İzmir of late, where they have lost just one of their last five home matches and they could be worth backing in the double chance market again against an ailing Galatasaray.

Both teams got in on the act in December when Altay held Galatasaray to a 2-2 draw in Istanbul and goals could be plundered at both ends again in Sunday’s rematch. BTTS has been a winning bet in three of Altay’s last four home matches while four of Gala’s last six tests on the road have also produced goals at both ends. With plenty of statistical evidence to go on, bettors can back both teams to notch again with confidence this weekend.

Galatasaray’s confidence would have been given a real wobble after three successive away defeats and Altay boss Sefer Yilmaz will be pushing his players to start quickly on Sunday in an attempt to unsettle their fragile visitors. Nervous underperformers Gala shipped the first goal in two of their last three away fixtures and with their state of mind a factor, bettors are advised to back Altay to break the deadlock in İzmir.

Altay will be without the services of injured duo Ozgur Ozkaya and Deniz Kadah this weekend. The club are a massive ten points adrift of safety with just five fixtures left to contests and a return to Turkey’s second tier after just one campaign in the top flight looks all but confirmed.

Sofiane Feghouli is listed as Galatasaray’s only injury worry this week. Gala are all the way down in 12th place in the Super Lig following a nightmare season. With a roster packed with ageing former starts, a major summer rebuild is required, though it’s unclear whether January appointment Domènec Torrent will be allowed to oversee the changes.

Top Betting Odds and Stats for Altay vs Galatasaray

Check out our collection of the best stats for Sunday’s match below alongside a tool to help you choose the best odds. 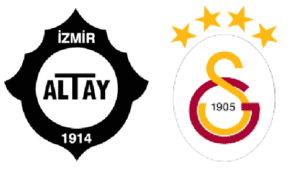 Altay vs Galatasaray will be contested at Alsancak Mustafa Denizli Stadı on Sunday.

Altay and Galatasaray drew 2-2 when the last met on December 4th.