The final game of the round in the Spanish Segunda is the Almeria vs Sporting Gijon duel. With that in mind, we have prepared a preview of the match for you, along with some free betting tips.

Our top betting predictions and picks for Almeria vs Sporting Gijon

If you are struggling to decide on the best bet for the Almeria vs Sporting Gijon duel, check our best betting tips for this game:

At the moment, Almeria is only behind Eibar in La Liga and they are trying to secure direct promotion to the top flight of Spanish football, but a few other teams are right behind their backs.

Meanwhile, Sporting Gijon had a pretty poor season and they are currently in the 17th place in the league. In addition to this, Almeria beat Sporting Gijon in three of their last four meetings, so we expect that to happen again on Monday.

We did not see both teams score in any of the last four head-to-head duels between Almeria and Sporting Gijon, so we don’t expect that to happen in their next game either.

That being said, both teams scored in 47% of all Almeria games in Segunda so far, while the same is true for 61% of all Sporting Gijon matches in the league this season.

Almeria vs Sporting Gijon preview: Can Almeria stay in the race for the top?

With two wins, three draws, and one loss in the last six games in the league, Almeria is keeping up the pace with other teams at the top and they are currently second in the standings. However, it’s a tight race for direct promotion with a few other teams right behind them, so they need to do well in the last six rounds of the league to secure their place in La Liga for next seaoson.

The team that was in the playoffs for La Liga promotion last season didn’t do nearly that well in this one since they are currently seventeenth in the standings and in danger of getting relegated. That being said, they do have seven points more than the first team in the relegation zone, but they also have six more games to play.

The latest stats and useful odds for Almeria vs Sporting Gijon

If you want to bet on the best odds for the Almeria vs Sporting Gijon duel, check our selection of odds from the top UK bookmakers: 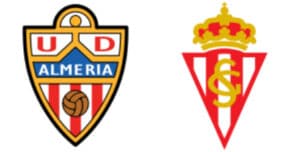