The Almeria vs Lugo duel in the upcoming round of La Liga 2 might turn out to be more interesting than expected. So, check our preview if you want to know more about this game and if you’re looking for some free betting tips.

Our best Almeria vs Lugo betting predictions, picks, and more

If you are not sure what is the right bet for the Almeria vs Lugo duel, check our top betting tips for this game:

Almeria to Win at Half Time and Full Time

Although Lugo is having a solid season since they are in the middle of the standings in Segunda and while they have only lost once in the last six games, Almeria is simply on another level compared to them.

With the home team fighting for a direct promotion to La Liga, we can see them winning this match and doing it in a convincing manner. So, our prediction is for Almeria to win the game after leading at half time.

Three of the last five head-to-head duels between Almeria and Lugo have gone over 2.5 total goals and we expect that to be the case once again when the two teams meet on Saturday.

While both teams have scored in just two of the last five h2h meetings between Almeria and Lugo, that happened in their last two meetings and it could be a start of a new trend.

After all, both teams scored in a whopping 70% of all Lugo matches in the league until now, while the same is true for 47% of all Almeria matches in La Liga 2 this season.

Almeria vs Lugo preview: Can the guests put up a fight?

The team from Almeria is currently in the second place in the standings, which would take them directly to La Liga next season. However, a few other teams are only points behind and we will certainly be seeing a very exciting race for the first two spots until the end of the season. Almeria has four wins and a loss in the last five matches in the league.

In the last five games in La Liga, Lugo has one win, three draws, and one loss, so the team has been hot and cold lately. In fact, that’s been the case for the entire season for Lugo since the team is currently in the middle of the standings and unlikely to move much up or down until the season ends.

The latest stats and odds for Almeria vs Lugo

You don’t have to spend a lot of time looking for the best Almeria vs Lugo odds – you can find them all right here:

The usual questions for Almeria vs Lugo 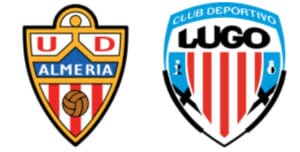