Ajax host Zwolle at the Johan Cruijff Arena in the Eredivisie on Saturday. Ajax can take a step closer to the title with a win over Zwolle in Amsterdam. Read our free predictions and find the latest odds for the fixture below in our detailed match preview.

Ajax are targeting their seventh straight Eredivisie victory when they welcome Zwolle to Amsterdam on Saturday. Read our top three predictions for this weekend’s fixture below.

With PSV breathing down their necks, Ajax cannot afford any slipups in the Eredivisie title race and though they haven’t been at their best in recent weeks, we expect them to do a professional job against Zwolle. The Amsterdam giants have beaten the relegation candidates to nil in each of the clubs’ last three encounters and another shut out, along with three precious points, should be on the table for Erik ten Hag’s troops again on Saturday.

Ajax haven’t quite been at their fluid best in recent weeks and their late 1-0 win at NEC last time out was the second game on the bounce when the champions-elect notched two or fewer times. Ajax only managed to net a modest two goals when they last took on Zwolle in September, so a glut of goalmouth action on Saturday when the clubs reunite feels unlikely. With that considered, a stake on under 3.5 goals at the Johan Cruijff Arena is recommended.

Ajax have become the kings of the comeback in recent weeks and the Eredivisie leaders have become adept at overturning early deficits in the second half of their assignments. Indeed, 16 of their last 25 goals in the league were registered after the interval and Ajax’s habit of sparking into life after the break can be taken advantage of in the markets by backing the second half to see more action than the first again.

Ajax could be without Andre Onana, Zakaria Labyad, Antony, Devyne Rensche and Remko Pasveer this weekend. Liam van Gelderen made his debut against NEC last week and Erik ten Hag could involve the 21-year-old defender again on Saturday. Ajax are four points clear at the summit of the Eredivisie and ten Hag will be determined to land the title before he joins Manchester United.

Mustafa Saymak, Dean Huiberts, Samir Lagsir and Sam Kersent are all in the treatment room for Zwolle. Back-to-back wins over AZ and RKC have pushed Zwolle to within two points of safety though they will need to keep the good results coming to secure another dramatic escape. Zwolle haven’t beaten Ajax since a shock Super Cup victory over de Godenzonen in 2014.

Top Betting Odds and Stats for Ajax vs Zwolle

View our selection of the best stats for Saturday’s match alongside a tool to help you choose the best odds. 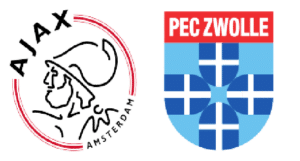 Ajax vs Zwolle will be contested at the Johan Cruijff Arena on Saturday.