Today, we will check out the upcoming Eredivisie match between Ajax and Willem II, so stay tuned to find out the best betting tips and predictions for the match.

In the list below, you can check out our latest predictions and free betting tips for the upcoming Ajax vs Willem II fixture.

All odds listed in the article are subject to change and are from Ladbrokes. Double-check them before going forward.

Ajax is the clear favorite and they will most likely win the match this Thursday because of two reasons. First, their form is the exact opposite of Willem II with 70% wins in the last ten games. On the other hand, the underdog here has lost or drew eight out of the last ten games they played in total.

Ajax is the obvious choice if we are looking for the favorite in Thursday’s match, and they will most likely score three points. This will give them even more advantage and they will still be at the top place in the Eredivisie table. The last time Ajax faced Willem II the match was in 2021 and it ended with a win for Ajax, so it’s likely that this game will also end similarly.

These statistics and the latest bookie odds are for the upcoming Ajax vs Willem II fixture this Thursday.

Popular Questions & Answers for Ajax vs Willem II on Thursday 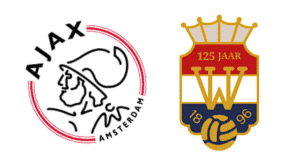