The first game between Galatasaray and Adana Demirspor since 2012 will be the subject of this preview. This game is taking place at the Yeni Adana Stadyumu.

Adana Demirspor made it back-to-back wins in the league following a 3-1 success over Alanyaspor during the weekend. Former Manchester City striker Mario Balotelli was one of the scorers for Adana Demirspor in this game. Galatasaray prevented back-to-back league victories with a spirited comeback against Istanbul Basaksehir in a 1-1 draw at home.

Galatasaray are outside the top half of the table and Fatih Terim has a long list of problems on his hands. The last league victory for Galatasaray was back in October. Meanwhile, Adana Demirspor have been on a strong surge of form with home matches alone providing three wins in the last five games. Adana Demirspor are targeting a first win over Galatasaray, but Terim’s team have been very resilient and it was proved against Istanbul Basaksehir during the weekend.

Galatasaray have not scored in three consecutive away matches in all competitions. Even though the team has been displaying a lot of resilience to force draws when they are not playing well, it can help the team only so much. After scoring under 1.5 goals in four consecutive home matches, Adana Demirspor are also not in a fantastic position.

Galatasaray have shown spirit in recent weeks but the team has failed to score in three out of the last five games. Adana Demirspor have registered three consecutive clean sheets at home in the league, but a team like Galatasaray visiting the ground is likely to cause nervousness and this run might be broken.

Adana Demirspor have been playing very well over the last few weeks to make a push up the league table. The club are now just three points away from the top four places. Coach Vincenzo Montella does not have major injury problems apart from Sinan Kurt.

Galatasaray continue to struggle on many fronts even with one of the younger squads in the division. Even though the team has enjoyed some degree of success in Europe, there is a significant danger of the team even failing to qualify for Europe next season. Manager Terim will be without Christian Luyindama, Fernando Muslera, and Mbaye Diagne due to injury, while Sacha Boey is also not fit for selection.

Analysing the Stats for Adana Demirspor vs Galatasaray 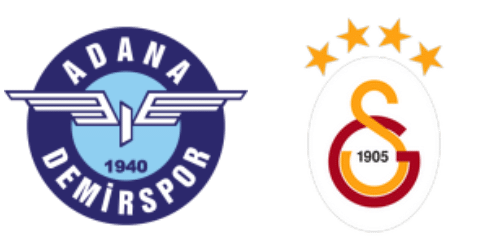 Where is the match going to take place? Yeni Adana Stadyumu