The upcoming match between Elche and Real Valladolid is of huge importance for both teams who are fighting against relegation. With that in mind, we have prepared a detailed preview of this duel, along with some betting tips.

Our top free predictions for Elche vs Real Valladolid

This is a duel that could be crucial in answering the question of who will get relegated from La Liga, despite there being many games left to play. So, take a look at some of our top free betting tips for Elche vs Real Valladolid.

Elche and Real Valladolid to Draw

The importance of this match will likely stifle both teams and we can expect an overly cautious approach from them in this game. With that in mind, our prediction is for the match to end in a draw. This is not unusual for Elche and Valladolid since three of their last five meetings have ended in draws. Also, both teams have drawn twice in their last five games, so that’s also somewhat common for them.

Elche and Real Valladolid to Draw at Half Time

Since we expect these teams to go into this match trying to avoid defeat rather than winning, it is clear that they will not rush anything and let the game develop slowly. With that in mind, we would suggest betting on a draw at half time as well. Furthermore, three of their last five head-to-head duels have been draws at half times.

Our initial instinct was to bet on a low-scoring outcome or no on both teams scoring, but once have taken a look at their recent h2h history, we changed our minds. Three of five of the previous meetings between these two teams have gone over 2.5 goals, while both teams have scored in four of them. So, we decided to respect the tradition and suggest betting on both teams to score.

The two teams are preparing for a long fight for survival in the last seven games of the season, starting with the direct match. So, a win for either team would be huge here. Let’s take a closer look at Elche and Real Valladolid and what we can expect of this duel.

With one point behind their upcoming rivals, Elche is currently in the relegation zone. However, a win could see them climb out of it by the next round, so it’s clear how important this match is for both teams. Elche has failed to win in their last six games in the league though, so they are definitely not in the best form at the moment. Luckily for them, only Carrillo is doubtful due to an injury, although Fidel will also miss the game due to suspension.

The cushion that Valladolid had before has melted since the team only managed one win in their previous thirteen La Liga games. So, now they are in the fight for their life with the same number of points as the first team in the relegation zone. That being said, Real Valladolid also has one more match to play than their competitors. Another problem for the team is the very long injury list, with some important names like Weissman, Sanchez, Garcia, and El Yamiq on it.

Top odds and stats for betting on Elche vs Real Valladolid

Our selection of odds and stat can help you find the best odds for Elche vs Real Valladolid, so check them out: 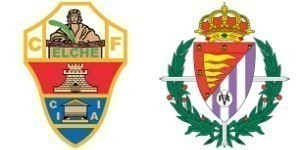