The World Cup Qualifiers in South America are continuing and the first game in the 6th round is the Ecuador vs Peru duel. If you want to learn more about this game, check our in-depth preview and get some free betting tips.

Our best betting tips and free predictions for Ecuador vs Peru

The Ecuador vs Peru match offers a lot of different betting options, so check our best free predictions for this match if you need some help:

Ecuador to Win with Handicap (-1)

To be completely honest, we would’ve never suggested this bet before the start of the WC Qualifiers in South America, but Ecuador has been the most pleasant surprise in qualifiers so far. The Ecuadorians have won three of their first five games, losing only to Brazil and Argentina away from home. Meanwhile, they’ve beaten Uruguay 4-2 and Colombia 6-1 at home. On the other hand, Peru has only gotten one point in the first five rounds, so our prediction is for Ecuador to win by at least two goals, especially since they’ve won the last two matches against Peru.

We’ve already explained why we expect to see a high-scoring match and all that we said above holds true for this prediction as well. Both teams have scored in three of the five previous duels between Ecuador and Peru, three of the last five Ecuador games in the qualifiers, and two of the five Peru matches in the group. With that in mind, both teams to score sounds like a good bet.

Ecuador vs Peru preview: Can Ecuador stay unbeaten at home?

The two teams find themselves in different positions ahead of their duel – Ecuador is sitting in third place of the WC Qualification group, while Peru is at the very bottom right now. Let’s take a closer look at both teams:

After five rounds in the South American group of World Cup Qualifiers, Ecuador is in third place with nine points. The team has won three matches and lost twice, surprising many experts in the process. Even more surprising was their convincing win in the last round in a game against Colombia, which Ecuador won 6-1. In any case, they have shown a lot of potential and so far have only lost to Brazil and Argentina, making them early favourites to reach the main stage in Qatar.

Although the Peruvian national team reached the final of the Copa America in 2019 and participated in the 2018 World Cup in Russia for the first time since 1986, they did not have the best start in the WC Qualifiers. In the first five games on the road to Qatar, Peru has lost four times and only managed to draw once in Paraguay. That being said, the team did have a difficult schedule since they’ve already played against Brazil, Argentina, Colombia, and Chile, so they are certainly hoping that they can turn things around.

Top odds and stats for Ecuador vs Peru

If you want to bet on the best odds for Ecuador vs Peru, we’ve got odds from the best UK bookies right here: 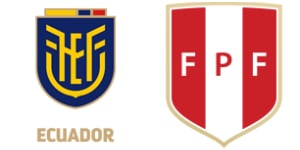