Celtic are seemingly back to their usual selves now after an indifferent start to the season. That’s not good news for Dundee, is it? Find out with our Dundee vs Celtic preview here along with the predictions and free tips we mention along the way.

A win and clean sheet for Celtic

You’d have to go all the way back to May 2001 to find the last time Celtic lost to Dundee; The Bhoys have won 17 of the last 20 meetings between these sides losing none. This season, Dundee have been the second lowest scoring team in the Premiership; James McPake’s men failed to score in six of their last ten games across all competitions. It’s worth pointing out that Dundee have not scored a single goal in their last eight meetings with Celtic; considering Celtic have won 10 of their last 11 clashes with Dundee a Celtic win to nil looks like good value.

A HT/FT win for Celtic

At least one team will blank

Dundee have not scored in their last eight meetings with Celtic; they’ve managed just two goals in the last 15 encounters between these sides. We’ve already pointed out that Dundee have failed to score in six of their last 10 games; we should also mention Celtic’s defensive prowess. The Bhoys have kept four clean sheets in their last six games, they’ve conceded just three goals in that stretch. Both teams have not scored in seven of Dundee’s last ten games, and in four of Celtic’s last six games; considering it’s been the same case in the last eight meetings between these sides we offer the tip that at least one team will blank.

The best odds for Dundee vs Celtic

Dundee FC managed to get their first road win of the season last weekend at St Mirren; The Dees will hope to string up consecutive wins for the first time this season despite it being a tough ask. James McPake will have to do without star man Leigh Griffiths; the Scot is on loan from Celtic, and is ineligible for selection against his parent club.

Celtic extended their unbeaten run to seven games after an interesting five goal thriller in the Europa League; Ange Postecoglou’s men have won six of their last seven games, and they’ll be eyeing another today. Jota and Kyogo Furuhashi are some of the players to keep an eye on.

The final word on Dundee vs Celtic 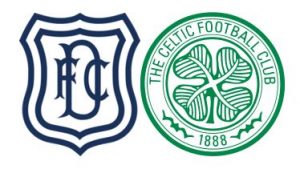