Dundee United’s good start to the season continued last time out. Will it be more of the same here? Find out with our Dundee United vs St Johnstone preview here along with the predictions and free tips we mention along the way.

If a win doesn’t come, they’ll still win a half

Dundee United have scored just one goal per game on average this season and they’ve conceded even less. Dundee United’s games tend to be low scoring as a result. Nine of the eleven games they’ve played this season have seen less than three goals scored. In the same vein, St. Johnstone have scored just 0.6 goals per game on average, conceded just 1.1. Five of St. Johnstone’s last seven games across all competitions have seen under 2.5 goals. Considering five of the last six meetings between these two have gone under 2.5, this will likely be low-scoring.

The best odds for Dundee United vs St Johnstone

Dundee United missed out on a golden chance to go second on the Premiership table on Wednesday. Despite being a man up against Livingston for over 45 minutes, Dundee United couldn’t get the win. Thomas Courts’ men have not lost in their last seven league games, they would like to extend that streak today. Solid displays from Jeando Fuchs and Ian Harkes wouldn’t go amiss.

St. Johnstone have dropped to tenth on the twelve team Premiership table due to their poor run of form. The Saints have only managed one win in their last five league games, losing three of them. Callum Davidson will hope to put an end to their three match winless run today and will ask for big performance from Stevie May.

The final word on Dundee United vs St Johnstone 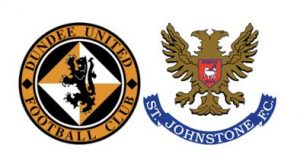