The first round of the English League Cup brings us a few interesting duels, like the Derby vs Salford matchup. If you want to learn more about this game and get some free betting tips along the way, check our detailed preview of the match.

Our top betting tips for Derby vs Salford

The home team is obviously favoured to win the game, but there are other interesting Derby vs Salford bets you can try, so check our selection of top betting predictions:

Derby to Win at Half Time and Full Time

Even though Derby barely escaped relegation last season, they are still the better team compared to Salford who plays in League Two. That being said, these two teams met a couple of weeks ago in a friendly match, which Salford won 2-1. Still, our prediction for this game is for Derby to lead at half time and win it at the end, simply based on the difference in quality between the teams and the fact that Derby is playing at home.

The friendly match between these teams that was played a couple of weeks ago is their only head-to-head meeting and it went over 2.5 total goals. With that in mind, and the fact that we expect a convincing win for Derby, we expect this match to go over 2.5 total goals as well. That being said, Derby averaged 2.04 last season in the league, while Salford averaged just 1.91 goals per game last season in League Two.

While we expect Derby to win the game, we can see Salford scoring in this match. After all, they’ve scored a couple of goals against Derby in their friendly meet just a couple of weeks ago. Furthermore, this is a cup game and there is no rematch, so both teams will play offensively to try and finish the job in regular time and avoid penatlties.

Derby vs Salford preview: Can Salford put up a fight?

We expect to see an exciting duel between these two teams, despite the fact that the guests are playing in a lower league. So, let’s take a closer look at the teams now:

The last day of Championship last season was very exciting and we only found out who was relegated in the last fifteen minutes of the season. Fortunately for Derby, they ended up on the positive side of things that day, so they will have a chance to do better this season in the second-tier league of English football. In the first round of Championship this season, Derby drew with Huddersfield at home.

After missing the playoffs in League Two last season by just a couple of points, Salford will be hoping to at least reach this stage this year, if not even fight for a direct promotion to League One. However, they started the new League Two season with a draw with Leyton Orient at home, so they will have to do better in the future if they want to reach their goals this season.

Top odds and helpful stats for Derby vs Salford

The odds for Derby vs Salford can vary a lot from one betting site to another, so check our list of odds from the best UK bookies: 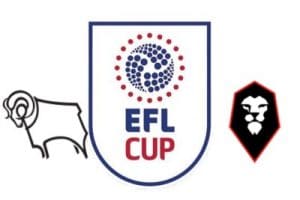