The home team has just one win in eight games and will be going for their second in a bid to climb out of the bottom half of the table. The away team is desperate for a win, having picked up just one point in the last four games.

Our Best Picks and Predictions for Defensa y Justicia vs Independiente

To set the right bet for Defensa y Justicia vs Independiente, read about our predictions and betting tips for free:

The matches between these two teams are always very close since 2013 they have met 14 times, with 7 wins for Independiente, 3 for Defensa y Justicia, and 4 draws.

A common factor has been that on all occasions when there has been a winner, the difference between the two sides has been a single goal. El Halcon will have the advantage of playing at home, we think this will influence the winner.

In the last 8 h2h, never more than 1 goal in the same match, 6 times the result was 1-0 and 2 times it was a goalless draw. So there are likely to be less than 3 goals in this game that looks so evenly matched.

The 2 teams have not scored in the same game in any of the last 8 head-to-head meetings. We predict that there will be at least one clean sheet for either team.

Who Will Get Out Of The Bottom? – Defensa y Justicia vs Independiente Preview

The joy of El Halcon’s first win two games ago was short-lived, as they immediately lost the next one. Sebastian Beccacece’s team once again lacked ideas in attack.

Likewise, their defence was fragile, and they had to commit several fouls to stop Sarmiento’s attacks. The set pieces were the condemnation for Defensa y Justicia, as El Verde scored twice, once from a free kick and then from the penalty spot.

In the previous season, the Reds had a new coach, Claudio Graf, who was unable to make his debut with a victory. However, with the new coach, the team was able to stop its streak of consecutive defeats.

Independiente hosted Rosario Central, another team that is also in a difficult situation. Both teams tried to hurt each other, but the lack of precision and the lack of danger of their shots made the game end with a nil-nil draw.

If you want to bet on the top odds for Defensa y Justicia vs Independiente, check our selection of odds from the best betting sites: 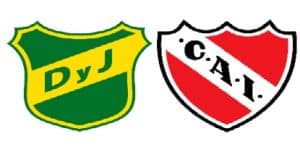 Who is the bookmakers’ favourite to win? The more probable winner is Defensa y Justicia at 13/10 (2.30) odds