The 2 worst teams in the tournament will face each other in an attempt to get out of the bottom of the table. We have prepared the best analysis with accurate predictions based on the statistics of each team.

To set the right bet for Defensa y Justicia vs Aldosivi, read about our predictions and betting tips for free:

the most recent h2h has been very even, as they have ended in draws or some team won by 1 goal difference. The home team has shown that they have the same attacking power as last season, but with some weaknesses in the defensive line. We think Aldosivi will be very defenseless playing in their opponent’s stadium, so we expect the home side to win.

This makes 2 of the lowest scoring teams in the tournament, neither team averages more than 1 goal per game, but it is also true that both defences are fragile, so we expect both teams to increase their goal tally this matchday.

The home team has conceded goals in 5 consecutive matches. Aldosivi could only keep 1 clean sheet out of 6 matches played. So they have a good chance of scoring against each other.

Last week, the Falcons had a tough match against Gimnasia. Throughout the match, both teams were attacking each other, but the goalkeepers of each team were in charge of repelling any shot.

It took until the 78th minute for either side to open the scoring, in this case, it was Lobo who went ahead to take the lead. Once again, Defensa y Justicia conceded a goal from a set-piece.

El Tiburon was finally able to end a run of five games without a win. On the previous matchday, the team coached by Leandro Somoza faced Rosario Central, this duel was very even as both teams had some chances to score.

However, Aldosivi were more effective and scored twice, while their opponents scored just once to take the three points. Despite the 3 points, El Tiburon still occupies the last place in the table, so they need to keep on scoring to escape from there.

If you want to bet on the top odds for Defensa y Justicia vs Aldosivi, check our selection of odds from the best betting sites: 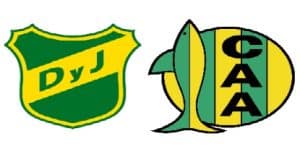 Who is the bookmakers’ favourite to win? The more probable winner is Defensa y Justicia at 8/13 (1.61) odds