The first round of the Chilean championship is coming to an end and both teams are in different situations. While Curico is close to the top four, Audax is on the verge of relegation.

To set the right bet for Curico Unido vs Audax Italiano, read about our predictions and betting tips for free:

In addition to having a great season and staying in the top places, the Curi has had real battles with top-four rivals, while Audax Italiano has lost to several top opponents, so we assume that the home team will get the win.

The home side has scored at least once in three consecutive matches. In this Chilean First Division season, Audax has an average of 1 goal per game, however, they have failed to put the ball in the net on 3 occasions in their last 3 matches, so we expect the guests will not be able to beat the goalkeeper.

The Curi lost on the last matchday at home and with that unable to go 7 consecutive matches without losing. The Curi also moved away from the first places that give access to the Copa Libertadores, for now, they have to settle for fifth place, 8 points behind Colo Colo, the very team that gave them such a painful defeat.

Colo-Colo took an early lead after only 3 minutes and increased the difference to 2, after which they slowed down a bit to maintain the lead. Curico Unido had more control for the rest of the match but never recovered from those couple of blows.

In a match played at the Municipal Nicolás Chahuán Nazar Stadium, Tanos could not get win in their previous match despite having played a good game against Union La Calera. Audax had 54% possession of the ball and 18 shots, although only 5 were on target. None of this was enough to score the only goal of the match scored by Willians Alarcon. After this tough encounter, Tanos is closer to relegation than to a place in the Copa Sudamericana.

If you want to bet on the top odds for Curico Unido vs Audax Italiano, check our selection of odds from the best betting sites: 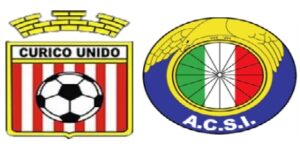 Who is the bookmakers’ favourite to win? The more probably winner is Curico Unido at 9/10 (1.90)