The last match of the round in the Brazilian league is the Cuiaba vs Sao Paulo duel. Check our in-depth preview of the match if you want to learn more about it and get some free betting tips along the way.

If you are hoping to find the best Cuiaba vs Sao Paulo bet, check our betting tips for this match:

Cuiaba and Sao Paulo to Draw

These two teams are only separated by one point in the standings, so this should be a very close match. Furthermore, Cuiaba and Sao Paulo already drew in their first meeting this season and we expect the same to happen once again. To top it all off, Cuiaba drew in three of their last five games, while Sao Paulo drew in four straight games in the league. So, a draw here sounds like a reasonable outcome.

Cuiaba and Sao Paulo to Draw at Half Time

Since we hope to see a draw at the end of the game between Cuiaba and Sao Paulo, we also expect the teams to be even at half time, which is often the case with games that end without a winner. In addition to this, Sao Paulo drew at half time in 13 of their 24 matches in the league, while the same is true for 9 of 24 Cuiaba matches in Serie A.

The previous duel between Cuiaba and Sao Paulo this season ended with both teams scoring twice, so we expect both teams to score at least once in their upcoming duel as well. In addition to this, both teams have scored in 50% of all Cuiaba matches in the league this season, as well as half of all Sao Paulo games in Serie A so far.

The latest stats, odds, and more for Cuiaba vs Sao Paulo

If you are hoping to bet on the top odds for the Cuiaba vs Sao Paulo duel, check our list of odds from the best UK bookies:

Cuiaba vs Sao Paulo preview: Will we see another draw here?

With one point separating the two teams in the standings, it’s clear that we are about to see an interesting duel. So, let’s take a closer look at both teams right now:

At this time, Cuiaba is still safely tucked in the middle of the standings in Serie A. With one win, three draws, and one loss in the last five games in the league, Cuiaba is in solid form. Another positive at the moment is the fact Cuiaba currently has no injury issues, so the fans have a right to hope that the team can keep the good form going for a bit longer to avoid any potential relegation issues.

It’s been a rough season for Sao Paulo in Serie A since they are still very close to the relegation zone – only three points away to be precise. However, Sao Paulo has done ok recently since they are without a loss in their last five matches, although four of those matches have been draws and just one ended in a Sao Paulo win. On top of this, Couto, Vinicius, Orejuela, and William will all miss the upcoming game due to injuries.

The most frequent questions for Cuiaba vs Sao Paulo 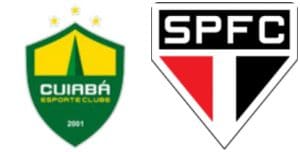