Today, we will check out one of the three League Oe matches for Tuesday – Crewe vs Morecambe. Continue reading to find the top free betting tips and predictions for the event.

Below, you can check out the top free tips for the upcoming Crewe vs Morecambe match next week. If you want to see more League One predictions, feel free to check out our latest content.

The odds we used here are from the Betfred platform, so make sure you double-check them before confirming any wagers.

Crewe is currently the last team in the League One chart when it comes to goals scored in their matches. All of their matches this season ended with under 2.5 total goals, and the average goals for the whole season are only 1.7 per match. For Morecambe, three of the last five matches ended the same way.

Fixture Preview, Team News, and Injuries for Crewe vs Morecambe

Morecambe hasn’t won a game against Crewe since 2012 and they will have a tough time doing so even against one of the teams at the bottom judging by their recent form. With only one win out of the last seven fixtures, they will most likely drop down to the bottom three teams after the next round of matches.

Crewe didn’t start out perfectly this season and they only have five points accumulated, for now. The match against Morecambe is a great way for them to escape the bottom of the table because they won plenty of games against them in the past. That includes four of the last five matches they hosted against Morecambe.

Latest Statistics and Data for the Crewe vs Morecambe Match

In the table below, you can check out the latest statistics and odds for the Crewe vs Morecambe match this Tuesday. 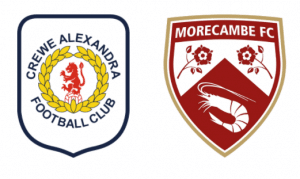