If you are looking for the best betting tips and odds for the upcoming Crewe vs MK Dons fixture this weekend, then you came to the right place.

Our Predictions and Latest Betting Tips for Crewe vs MK Dons

After going over the data, these are the top free betting tips and predictions we came up with regarding the Crewe vs MK Dons fixture.

All odds are from Ladbrokes and are correct at the time of writing. Before wagering, make sure you check your bet slip for any changes.

In the past most of the times that MK Dons and Crewe faced each other, the matches ended without both teams scoring – eight of the last ten games they played. Crewe has also shown the same tendency in a lot of their recent matches no matter if they won or lost them. Three of the last four matches they played ended with a clean sheet. Likely, Saturday’s game will also end that way.

Based on the head-to-head history between the two teams, Crewe has a bigger chance of winning the fixture against MK Dons even though they are currently fourteen points behind them in the League One table. Crewe won three of the last four head-to-head matches against MK Dons. That includes the last game they played together, which was this year.

Saturday’s match between MK Dons and Crewe will be contradictory because we see one thing in the head-to-head history between them, but the League One rankings show another. For example, while Crewe is dominating MK Dons in the head-to-head section, MK Dons is fourteen points ahead of Crewe in the table.

Crewe has only an injured player – Ben Knight – who is expected to be back from his injury on November 5th, while MK Dons don’t have any injured or suspended players on their squad.

In these tables, we can see the most recent match stats and scores for both Crewe and MK Dons before their clash this weekend. 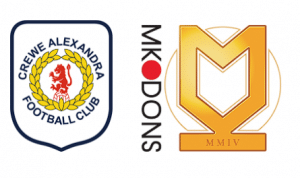