In this article, you will be able to find a lot of betting information on the upcoming fixture between Crewe and Doncaster.

Top Predictions and Free Tips for Crewe vs Doncaster

Here is the top Crewe vs Doncaster betting tips for their upcoming match this weekend. If you want to see more League One predictions, check out our website.

All odds you see here are from Ladbrokes and are correct at the time of writing. Before wagering, make sure to double-check your bet slip.

In the past, most of the times Crewe and Doncaster met, the matches ended with goals from both sides of the pitch. This means that the match on Tuesday also has a high chance of ending that with a BTTS outcome, like four of the last five head-to-head games between them. Also, two of the last three games both teams played in League One ended with both teams scoring, as well.

When looking at both teams’ recent form and their overall performance during the season, so far, we can’t ignore the fact that Doncaster is the likely winner. Crewe won only one of the last fifteen matches they played this season, while Doncaster is three points ahead of their current opponents, even though both of them are at the bottom of the table. The last two times they faced each other, Crewe managed to prevail, but their current form led us to believe that this time they won’t.

Both teams are lucky in terms of injuries because none of their players are suffering any at the time being. The same goes for suspensions, but that isn’t enough to help them climb up the table. Especially since both of them are in the relegation section. While Crewe had the head-to-head advantage over Doncaster, we don’t think they would win this week. The team with the better form is Doncaster and they have a high chance of winning even with the head-to-head disadvantage.

You should go over these head-to-head statistics before Tuesday’s Crewe vs Doncaster because they will help you decide on your final bets.

Popular Q&As for Crewe vs Doncaster on Tuesday 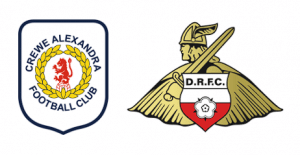